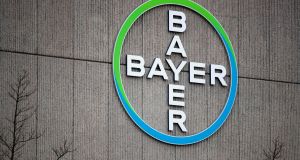 Among the biggest fallers on the European index was Bayer, which was down 2.9 per cent. Photograph: Odd Andersen/AFP/Getty Images

World stocks fell for a second straight session on Monday on persistent concerns over global economic growth, while benchmark 10-year US Treasury yields fell to their lowest point in more than a year.

Europe suffered a fourth day of losses as worries over the pace of global growth were compounded by Brexit uncertainty.

The biggest gainer was financial services group IFG, which spiked by more than 42 per cent to €2.18, after its board recommended acceptance of a takeover offer from British group Epiris.

Independent News and Media rose almost 9 per cent to breach the 7 cents per share barrier, ahead of its full-year results on Friday.

British satellite operator Inmarsat’s shares rose 9.6 per cent, the biggest gainer, after a private equity-led consortium agreed to buy it for about £2.6 billion in cash.

Fresnillo outperformed the Ftse 100, with a 2 per cent gain as safe-haven assets such as gold were in demand.

Shares in Majestic dropped after the wine retailer announced a store closure plan as part of a wider transformation that will see the group stomach extra costs.

The Debenhams debacle also rumbled on, with Mike Ashley’s Sports Direct hitting out at the retailer for rejecting his latest attempt to wrest control of the business. Debenhams shares declined 0.04p to 1.548p.

European stocks pulled back from an initial 0.8 per cent fall after an unexpected rise in German business sentiment that eased fears of a recession in the European Union’s largest economy

The pan-European Stoxx 600 index closed 0.45 per cent lower. Germany, Paris and Madrid fell about 0.2 per cent, while Milan lost 0.1 per cent, although nearly all major indices were trading below average volumes.

Among the biggest fallers on the European index was Bayer, which was down 2.9 per cent after the German pharmaceuticals group and Johnson & Johnson agreed to settle thousands of US lawsuits against their blood thinner Xarelto for $775 million (€685 million).

Wood Group was the worst Stoxx 600 performer, with a 7.6 per cent drop, after Jefferies cut its rating on the oilfield and engineering services provider, citing dividend risks.

US stocks fell amid a drop in technology shares and as traders remained on edge after Friday’s sell-off.

In a bright spot, the consumer discretionary sector rose 0.31 per cent, supported by gains in Home Depot and Amazon.

Boeing rose 1 per cent after the plane maker said it would brief pilots and regulators this week on software and training updates for its 737 Max aircraft.

Akamai Technologies fell 3.5 per cent, the most on the S&P, after a report that brokerage Deutsche Bank had downgraded the stock to sell.

Viacom shares rose 5.8 per cent, the most on the S&P, after the company renewed a contract with AT&T to continue carrying its services. AT&T shares dropped 1.2 per cent. – Additional reporting: Reuters/PA