Trump may regret hitching his presidency to ageing bull market 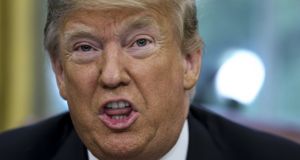 Following the interruption of a chuckling audience at the United Nations general assembly late last month after he boasted about his administration’s accomplishments, Donald Trump was quickly back on message.

“Since my election, we have added $10 trillion of wealth – the stock market is at an all-time high in history,” said the US president.

The 1,898-seat auditorium in New York had barely emptied after Trump’s otherwise hawkish speech – in which he took aim at China, Iran and the Organisation of the Petroleum Exporting Countries (Opec) – when the markets began to turn.

The S&P 500 index on Wall Street has since fallen by as much as 7 per cent amid its longest losing streak since before the president’s election in November 2016. The picture hasn’t been much prettier across the Dow Jones Industrial Average or the Nasdaq Composite.

With an eye on the upcoming US mid-term elections, Trump sought out a more sympathetic audience in a phone interview with Fox News late on Wednesday, where he laid blame for the stock market rout firmly at the door the Federal Reserve, the country’s central bank.

Most market commentators, however, have put the Wall Street-led sell-off across international markets down to mounting concerns about the tariff face-off between the US and China. The International Monetary Fund (IMF) this week cut its global economic forecast, saying world growth is plateauing as trade tensions take their toll.

While global equity markets rallied on Friday after a pretty torrid week, commentators are now debating whether equities have just been through a brief correction or have felt the initial rumblings of a full-on bear market.

Amundi Asset Management, Europe’s largest asset manager which owns Pioneer Investments in Dublin, has advised clients to prepare for increasingly volatile markets for the remainder of the year, even if “the bear checklist is not yet flashing red”.

“Part of the reason for this sudden change is due to features of a late [market] cycle phase where even positive news can be read as bad news for markets,” Amundi strategist said in a note.

Against the backdrop of record employment, robust economy data and mounting inflation risks, the Fed, which has hiked its benchmark rates eight times since late December 2015 ( including three times so far this year), is on course to raise rates four more times by the end of 2019.

It’s all served to push the market interest rate – or yield – on 10-year US government bonds to 3.23 per cent, the highest level in seven years. Yields might have moved even higher had a subsequent sell-off in equities not prompted worried investors, ironically, to seek out safer assets – such as US treasury bonds.

The upcoming US quarterly earnings season will be key to the outlook for global markets, as investors watch for signs of how a 30-year low in the unemployment rate fuels wage pressures, as well as the impacts of tit-for-tat tariffs and rising oil prices.

Most strategists still see further life in the already-record 9½ year US bull market. But Trump may end up regretting hitching his presidency to a rising stock market so late in the cycle.

Closer to home, European markets have also been rattled in recent weeks by the Italian populist government’s stand-off with Brussels over its budget deficit as well as concerns over make-or-break Brexit talks between European Union leaders next week.

The mood music points to some sort of a Brexit accord being reached. But you only need to look at last month’s summit in Salzburg – where UK prime minister Theresa May’s plan was roundly rejected, prompting British newspaper headlines of an “ambush” and “humiliation” – to see how quickly things can deteriorate.

With the Iseq index off more than 13 per cent so far this year – on track for its worst performance since 2008 – it’s not an ideal market for initial public offerings (IPOs).

The Irish Times reported on Thursday that US private equity group Oaktree and Dublin-based Sigma Retail Partners have pushed out a decision on whether to proceed with Ireland’s first retail real-estate investment trust (Reit) flotation to 2019.

Last week, it emerged that that Press-Up, the State’s largest and fastest-growing pub and restaurant group, led by Paddy McKillen jnr, had decided to mothball plans for a stock market flotation.

Some other deals remain in the works. Market sources say the planned $45 million (€39 million) IPO of Irish-run T5 Oil & Gas, an Africa-focused exploration company, remains on track, with a possible announcement by the end of the month.

The fledgling company, which originally targeted an August transaction, is helped by the fact that oil prices have raced up as much as 50 per cent so far this year – even if they have handed back some of their gains in the past week.

Property company Tetrarch Capital is also planning to float investments such as its Citywest, Powerscourt, Mount Juliet and Killashee hotels, as well as the soon-to-be-bought Howth castle and demesne in a listed vehicle by the end of the year.

Prospective investors may be comforted by the undersupply of hotel accommodation in Dublin, as well as the stock market outperformance of its nearest listed peer, Dalata, which has declined by 5.9 per cent so far this year.

That’s when you consider that its main rivals, Cairn Homes and Glenveagh Properties, which floated in recent years, have each slumped by more than 23 per cent so far in 2018.