Iseq experiences one of the indexes biggest single-day falls of year, dropping 174 points 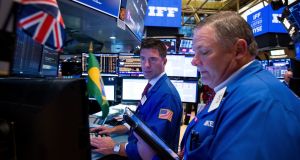 US stock indexes dived about 1% on Wednesday. Photograph: Michael Nagle/Bloomberg

On Wednesday European shares had their worst day since June as concerns around rising debt yields gripped equity markets worldwide, while tech stocks sank on signs of slowing demand in the semiconductor industry.

The pan-European Stoxx 600 index tumbled 1.6 per cent to its lowest since April 4th, while Germany’s Dax dropped 2.2 per cent. Among the tech sector’s worst performers in Europe were Austrian chipmaker AMS, which fell 6.6 per cent, and STMicroelectronics, which was down 5.6 per cent.

The Iseq experienced one of its biggest one-day falls of the year, dropping 174 points to 2.7 per cent to 6,153. Hotel group Dalata was down more than 4 per cent at €6.02 a day after Minister for Finance Paschal Donohoe removed the hospitality sector’s preferential rate of VAT. “Tourism was a shining light for Ireland in the darkness of recession and now the industry feels abandoned,” said Dalata chief executive Pat McCann. Iseq heavyweight Ryanair fell nearly 3 per cent to €11.41. There is speculation the airline will announce a raft of new routes this week.

Smurfit Kappa suffered an even bigger one-day drop, shedding almost 6 per cent to close at €29.53. Bank of Ireland and AIB also dropped, by 1.5 and 1 per cent respectively.

Britain’s top share index hovered near a six-month low on Wednesday as rising hopes for a Brexit deal lifted the pound, hurting the shares of big multinational companies.

The Ftse 100 retreated by 1.3 per cent, while the pan-European Stoxx 600 fell 1.6 per cent as tech stocks suffered their worst day since the 2016 Brexit vote and investors became anxious about rising yields affecting equities.

Among the biggest drags on the Ftse 100 were big multinationals Diageo and Reckitt Benckiser, down 2.4 and 1 per cent respectively. Burberry was the worst-performing stock, down 6.2 per cent, as investors sold shares in the richly valued luxury sector following a Morgan Stanley downgrade and amid worries over the key Chinese market. Miners were also a big drag on the index, with BHP Billiton, Glencore and Rio Tinto all falling 2 to 2.3 per cent as metals prices eased. Telecoms firm BT was the biggest gainer on the FTSE 100, up 4.2 per cent, as the broader sector in Europe, seen as a “defensive” play favoured during riskier times, was also in demand.

Austrian chipmaker AMS fell 5.9 per cent and peer STMicroelectronics lost 5.8 per cent after VAT Group said it was cutting working hours at one of its factories due to a fall in demand from the chip equipment makers it supplies.

Shares in VAT Group sank 10.3 per cent. “On the one hand, the short time working reflects the well-known softening of the investment cycle in the semiconductor industry since Q2 2018 . . . and on the other hand it also reflects the fact the industry weakness looks to be extending into Q1 2019,” wrote Baader Helvea analysts.

The biggest European faller was Wirecard, which sank 14.2 per cent, the day after the German payments firm got a big boost when it unveiled new targets, saying it would deliver six times current Ebitda by 2025. The stock has moved 9 per cent or more every day this week, and fell on Wednesday despite many positive notes from brokers, including an upgrade to “outperform” from Credit Suisse.

US stock indexes dived around 1 per cent on Wednesday as worries over China and the impact of rising Treasury yields on global growth drove falls in luxury goods companies and chipmakers. Technology stocks slid more than 2 per cent, the most among the 11 major S&P sectors, with the Philadelphia Semiconductor index down 3 per cent after Swiss vacuum valve maker VAT Group said demand from chip equipment makers was softening.

6 Technology really can be stranger than fiction at times