Iseq fell 1% to 6,388.99 while pan-European Stoxx index at lowest close in six months 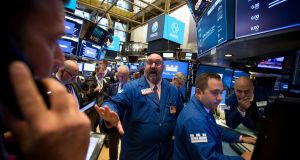 Ireland’s Iseq share index fell below the 6,400-point level to a 22-month low on Monday as European markets sold off on a deepening stand-off between Rome and Brussels over the Italian government’s budget.

The European Commission has told Italy it is concerned over its budget deficit plans for the next three years since they breach what the EU asked the country to do in July.

However, Italian deputy prime minister Matteo Salvini said on Monday the country would not cave in to market pressure and backtrack on its plans to increase deficit spending next year.

The Iseq fell almost 1 per cent to 6,388.99, a level last seen in mid-December 2016, while the pan-European Stoxx index dropped 1.1 per cent to its lowest close in about six months.

Markets internationally were also rattled by fears a trade war could have a bigger impact than expected on China as well as concerns that rising US interest rates are gradually making stock markets less attractive for investors.

Housebuilders were under pressure, with Cairn Homes down 3.1 per cent to €1.42 and Glenveagh Properties dropping 1.3 per cent to 93.9 cent, as some investors moved to the sidelines ahead of Budget 2019 being unveiled by Minister for Finance Paschal Donohoe on Tuesday.

C&C was also on offer, declining by 2.4 per cent to €3.41, as the value of sterling dropped on Monday. Financial markets adopted a degree of caution about the prospects of a Brexit deal being concluded either this month or in November.

Ryanair rose 1.1 per cent to €12, as Davy highlighted its “enduring” attractions, even as the brokerage cut its earnings forecasts for the carrier on the back of a profit warning last week.

Oil majors dragged the Ftse 100 index down 1.2 per cent to its lowest close since April, as political risk gripped Europe and caution set in again on Brexit, weighing on sterling.

Oil majors BP and Royal Dutch Shell dropped along with crude prices after the US said it may grant waivers to sanctions against Iran’s oil exports next month. Shell fell 0.8 per cent and BP 2 per cent.

Vodafone fell 3.5 per cent after Jefferies downgraded the stock to “hold” from “buy”, saying its dividend policy was too generous for the phone group’s operating prospects.

Tesco shares fell 2.2 per cent after broker Kepler Cheuvreux cut its target price on the stock.

French Connection rocketed as much as 45 per cent higher after the British fashion retailer said that it could be put up for sale. The stock closed 27 per cent higher.

Hearing aid maker William Demant fell 10.6 per cent on competition worries after the US-approved Bose Corp’s new hearing aid, which can be used without a doctor’s assistance.

Shares in two other hearing aid makers, Sonova and Amplifon, fell 8.7 per cent and 1.6 per cent respectively.

Norsk Hydro was a bright spot, up 3.9 per cent after the aluminium firm received a permit, helping it towards restarting its Alunorte alumina refinery at half capacity.

Wall Street shares were heading for a third straight day of declines in early afternoon trading, mirroring global stocks, amid growing unease over effects of the China-US trade war on global growth and with Treasury yields at multi-year highs.

The biggest casualties were technology stocks, with Apple, Microsoft and Nvidia all falling.

Among the few bright spots was General Electric, which climbed for the sixth day in a row. The latest advance was after Barclays echoed investor optimism over Larry Culp, saying the conglomerate’s new chief executive officer will be able to drive more robust restructuring.