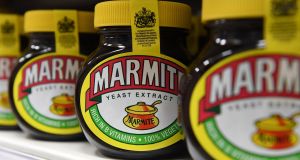 Fears that the US may accelerate interest rate hikes sent European shares falling to their biggest weekly loss on Friday. Investors believe the world’s biggest economy may be overheating as unemployment fell to a 49-year low.

Building materials giant and index heavyweight, CRH, was off more than 1.5 per cent at one point but clawed back some of those losses to end the day 0.9 per cent down at €28.25. In a related industry, insulation specialist, Kingspan, dipped 0.39 per cent to €41.08.

Ryanair, the focus of attention earlier this week following a profit warning, recovered some altitude, climbing 0.55 per cent to close at €11.865.

Dealers noted that the airline’s price has been making some ground since the middle of the week.

Hotel group Dalata shed 2 per cent to €6.37, although the size of trades were small, with 270,000 shares changing hands in total yesterday. According to traders, some of hotelier’s stock sold for €6.35.

Dutch-British consumer goods giant Unilever closed 0.61 per cent down at 4053 pence sterling after bowing to shareholder pressure and dropping plans to centralise its HQ in Rotterdam.

The maker of Dove soap, Marmite spread and Magnum ice creams announced the move to the Netherlands in March in anticipation of the UK’s departure from the EU next spring. The stock broke the 4,070p-mark during the day before dropping back ahead of the close.

Shares in retailer Quiz plummeted after it became the latest in its industry to warn over profits as poor trading and the collapse of House of Fraser hit sales. The group said full year earnings are expected to come in at £11.5 million, down from previous estimates of £15.5 million. For the six months ended September 30th, earnings will be “no less” than £5.5 million, £1.5 million lower than previous expectations. Shares dropped 53.75p, or 36.38 per cent to close at 94p.

Water company Severn Trent rose 1.74 per cent to 1,812p while investors trapped by Rentokil added 1.67 per cent the pest controller’s price, which closed at 334.1p.

Among the top movers was Danske Bank, which is facing a US criminal investigation into a €200 billion money laundering scandal at its Estonian branch. Shares in Denmark’s biggest bank were down 6.2 per cent after a rating cut by Credit Suisse.

There was no rebound for France’s Kering, down 2 per cent after the European luxury sector fell on concerns about the Chinese market.

Among smaller companies, shares in Spanish and UK shopping centre owner, Intu Properties soared 27 per cent after a consortium, including British billionaire John Whittaker’S Peel Group and Canada’s Brookfield Asset Management, said it was considering a bid for the company.

US stocks tumbled on Friday, weighed down by rising treasury yields after data showed job growth slowed in September, while wage increases were not enough to fan worries over rising inflation or faster interest rates hikes.

Apple fell 2.7 per cent after David Einhorn’s Greenlight Capital said it sold its remaining shares in the company on growing fear of “Chinese retaliation against America’s trade policies”.

Twitter dropped 0.5 per cent, giving up earlier gains after Greenlight also said it sold its entire stake in the company due to worries about regulatory risks affecting social media companies.

Facebook dropped 1.2 per cent, while Snapchat-parent Snap slid 1.7 per cent.

Tesla was down 7 per cent after chief executive, Elon Musk stirred nerves about the settlement of his securities fraud lawsuit by mocking the US stock market regulator, the Securities and Exchange Commission on Twitter.