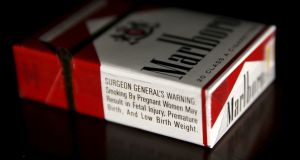 Marlboro maker Altria Group sank the most since 2008. Photograph: Reuters

Tobacco shares tumbled after the US Food and Drug Administration said it will seek tougher regulations on nicotine levels to curb addiction, threatening to further reduce the customer base for an American industry that’s been shrinking for decades.

Marlboro maker Altria Group sank the most since 2008, Imperial Brands closed in London at the lowest since November, and US-listed shares of British American Tobacco Group headed for the worst day in three years.

Together, the three purveyors of tobacco products shed almost $30 billion in market cap after the FDA announcement.

“Concern among investors is clear and not misplaced if the strictest reading of this announcement proves accurate,” Cowen analyst Vivien Azer wrote in a note to clients.

The selling came as the proposal caught investors in the $130 billion American tobacco industry off guard. If enacted, the rules would represent one of the most sweeping federal efforts to reduce smoking since Congress required cigarette packages to carry health warnings in 1965. – Bloomberg