Sluggish chocolate demand in North America is causing the slowdown 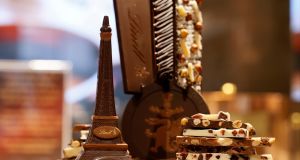 A chocolate model of the Eiffel Tower is displayed at the Swiss chocolate maker Lindt store in Paris. (Photograph: Reuters)

“Due to current developments in North America, it is anticipated that revenue growth for the full year will be slightly lower than in the previous year, combined with an increase of the operating profit margin. However, the group is still confident that its growth will considerably exceed the industry average,” it said in a statement on Tuesday.

It had previously expected sales growth in 2017 to be broadly in line with the 6 per cent progression seen in 2016.

Net profit at the maker of Lindor chocolate balls and gold foil-wrapped Easter bunnies rose 5.7 per cent to 76.3 million Swiss francs (€69.15 million) on sales up 3.1 per cent to 1.549 billion francs, corresponding to organic growth of 3.6 per cent.

Analysts polled by Reuters had on average expected net profit to rise to 77.3 million francs on sales up 6 per cent at 1.59 billion.

The first half is traditionally weaker at the chocolate maker, which said sales growth should accelerate in the second half. Organic sales in Europe gained 6 per cent in the first six months, while North American sales fell 3 per cent.

Lindt acquired US chocolate maker Russell Stover in 2014 and adjusted the brand’s product portfolio, which has weighed on US sales.

“The strategic realignment of Russell Stover is making progress, but will take more time than originally anticipated,” the company said on Tuesday.