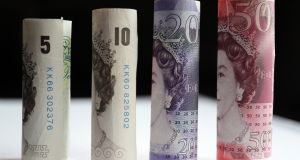 Britain’s pound steadied close to its highest levels in 10 months against the dollar on Friday on comments from the finance minister about a transitional leaving deal with the European Union.

They soothed market fears that the country is set for a “hard Brexit”.

Philip Hammond said on Friday that he wanted to avoid a “cliff-edge” where goods and people stopped being able to move across Britain’s borders when it leaves the European Union in March 2019.

Hammond added that EU nationals would continue to be able to work in Britain immediately after its exit from the EU, and changes to rules affecting relations with the EU could be phased in gradually over the transition period, which should be complete by the next scheduled parliamentary election in 2022.

Separately, the Financial Times reported Hammond has told business leaders he wants companies to have full access to the single market and customs union for two years after Brexit, followed by a further implementation phase.

Hammond’s comments followed similar ones from fellow cabinet ministers in recent weeks, which have led investors to bet on a lower chance of a hard Brexit in which Britain loses any preferential access to the single market, and which have given some support the currency.

But ING currency strategist Viraj Patel said the EU would have to agree to such a deal before traders really begin to price it in and for the currency to rally further.

“It’s good that the UK is moving towards this centre-ground on Brexit, but equally we need to see what the EU are willing to offer,” Patel said. “For markets to really start pricing this in, we need some consensus there.”

Patel added that over the longer term, such government unity on the need for a transitional deal diminished further downside risks for sterling, which has fallen around 14 per cent against the dollar since last June’s vote for Brexit.

Against the euro, sterling has lost almost 15 per cent since the vote. It was barley changed on the day on Friday at 89.49 pence.

Investors are now looking ahead to next Thursday, when the Bank of England will make a policy decision and release its quarterly Inflation Report.

Most analysts and economists expect the bank to keep interest rates at their record lows for now, although Nomura is calling for a hike.