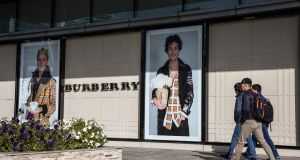 Burberry fell 5.6% along with shares in European luxury goods companies as concerns persisted over a slowdown in China. Photograph: Taylor Weidman/Bloomberg

European shares suffered their biggest fall in a month on Thursday as global stock markets came under pressure from surging bond yields. The pan-European Stoxx 600 benchmark index closed down 1.1 per cent, while France’s CAC 40 fell 1.5 per cent, Germany’s Dax declined 0.4 per cent and the UK’s FTSE retreated 1.2 per cent.

Data on Wednesday showed that US services sector activity raced to a 21-year high in September, lifting Treasury yields to their highest since mid-2011 on rising expectations for more US rates. Defensive companies were hit by the prospect of rising yields, which make their steady dividend streams less appealing. Shares in European luxury goods companies were also among the worst performers due to persistent concerns over a slowdown in China.

Ahead of next week’s budget and amid speculation Minister for Finance Paschal Donohoe may rescind the special low VAT rate for the hospitality sector, hotel group Dalata fell 1.6 per cent €6.50.

Britain’s top share index suffered its biggest loss since mid-August as rising US yields took their toll across global stock markets. The FTSE 100 fell 1.2 per cent to 7,418.34 points, mirroring overnight weakness in Asia and on Wall Street as markets digested prospects of a US interest rate hike. Weighing heaviest was the defensive consumer staples sector. British American Tobacco, which was trading without entitlement to its latest dividend pay-out, was the biggest faller of the day, shedding 3.8 per cent. Other defensive sectors such as healthcare or consumer discretionary sustained heavy losses and weighed on the index.

Burberry fell 5.6 per cent along with shares in European luxury goods companies as persistent concerns over a slowdown in China bite sentiment. All major sectors apart from financials, as banks typically benefit from rising rates and bond yields, were in the red.

France’s Kering tumbled 5.4 per cent, while rival LVMH was down 4.9 per cent. In contrast, financials tend to benefit from rising rates and bond yields as they help banks earn fatter margins on their traditional lending business.

German lenders Commerzbank and Deutsche Bank rose 3.5 and 1.5 per cent respectively, as German 10-year bond yields hit a four-month high. Italian banks rose 1.1 per cent as investors monitored developments in Rome, where the government is trying to finalise budget details after clashing with the EU over its deficit targets.

Denmark’s Danske Bank dropped 4.6 per cent after news it was being investigated by the US Department of Justice over a €200 billion money laundering scandal involving its Estonian branch. “They are a perfect example of how regulators come down hard on banks who appear to have broken the rules,” said Markus Huber, trader at City of London Markets.

Wall Street tumbled on Thursday, mirroring a slump in global financial markets, as US Treasury yields surged to multi-year highs on robust economic data and on upbeat comments from the Federal Reserve, sparking fears of accelerating inflation. The Dow Jones Industrial Average dropped for the first time in six days and, along with the benchmark S&P 500, was on pace for its biggest one-day drop since late June.

The Nasdaq fell nearly 2 per cent, dragged down by a drop in heavyweight stocks. Ten of the 11 major S&P sectors were lower. The communication services sector sagged 1.4 per cent, with Alphabet and Netflix dropping more than 2 per cent each, while Facebook sliding 1.6 per cent. Technology stocks declined 1.3 per cent and were the biggest drag on the markets. Apple fell 1 per cent.