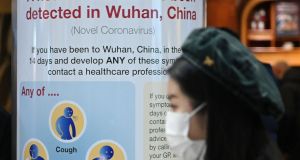 European stock markets rebounded on Tuesday, having lost ground in recent sessions due to fears of the impact of China’s coronavirus outbreak.

European stock markets rebounded on Tuesday, having lost ground in recent sessions due to fears of the impact of China’s coronavirus outbreak.

Banks and luxury goods companies led the recovery, while leisure and airline stocks also clawed back losses as investors took the view that the right steps were being taken to contain the illness.

The Iseq managed a 0.3 per cent climb, a rise that underperformed the major European indices. Building materials company CRH recovered only 0.1 per cent of its 2 per cent Monday slip to finish at €34.27.

The FTSE 100 added 0.9 per cent, while the mid-cap FTSE 250 gained 0.6 per cent. Virgin Money UK rallied 4 per cent after reporting higher loan book growth, while Irn-Bru maker AG Barr soared 15.4 per cent on the mid-cap stock’s best day since October 2005 after it forecast annual profit to be at the top end of the current market view.

Shares in Unilever, AstraZeneca and Reckitt Benckiser all climbed 2 per cent as sterling dipped on concerns about Britain’s future relationship with the EU, and ahead of a Bank of England meeting this week.

InterContinental Hotels, one of the stocks that had declined since the outbreak of the coronavirus, gained 3.1 per cent.

Among smaller stocks, tourism and insurance firm Saga advanced 7.6 per cent after saying it was on track to meet its annual profit outlook, despite a one-off charge related to the collapse of Thomas Cook last year.

London-listed Irish food company Greencore fell 1 per cent as it highlighted the challenging trading environment in an update to investors.

Luxury goods makers LVMH, Kering and Moncler, all of which derive a chunk of their demand from China, rose after sliding more than 3 per cent on Monday. Bolstered also by a recovery on Wall Street, the Stoxx 600 ended up 0.8 per cent. Along with most other major country indices, the benchmark index had lost more than 2 per cent in the previous session.

Wall Street rose as gains in technology and financial sectors helped major indexes recover from their worst sell-off in about four months.

Corporate results were mixed, with US industrial giant 3M sliding 5.7 per cent in early trading after it forecast 2020 profit below expectations as it faced sluggish demand in Asia. Pfizer fell 3.9 per cent after the drugmaker reported a lower-than-expected quarterly profit.

Harley-Davidson dropped 3.75 per cent after capping its fifth straight annual US sales drop with quarterly profit that missed estimates.

The market also awaited quarterly earnings from companies including Apple and Starbucks. Investors will keep a close watch on Apple’s earnings amid concerns of a disruption in iPhone production in China.