An independent Scotland could leave the North adrift 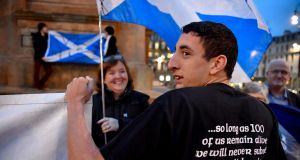 In the mid-1990s, Tony Blair’s opposition Labour party was divided on the merits of Scottish devolution.

Devolution was “a motorway to independence” without exits, the Labour MP for West Lothian warned.

In the end, Labour’s devolutionists comfortably won out. And the rest, as they say, is history.

Scotland is set for a second independence referendum in less than five years. Scottish National Party (SNP) leader Nicola Sturgeon boldly announced on Monday her intention to hold a vote on leaving the UK between autumn and spring 2019, unless Westminster offers substantial concessions to Scotland ahead of Brexit.

Such a last-minute change of heart from prime minister Theresa May appears unlikely. Sturgeon’s minimum demand – retaining Scottish membership of the single market – is likely to be too much for a Conservative government wary of inflaming its Eurosceptic backbenches and a largely pro-Brexit London press.

In truth, a second independence referendum has looked all but inevitable since last June’s Brexit vote, when almost two-thirds of Scots voted to remain in the EU, while England and Wales voted to leave.

Less certain, however, is when such a referendum might take place.

Sturgeon needs Westminster’s blessing for another vote, in the shape of a “section 30” order giving Holyrood the power to hold a referendum.

There is a pro-independence majority in the Scottish parliament, but both the Commons and the Lords could look askance at Sturgeon’s demands.

Many of the SNP’s 125,000 strong membership have been hoping for a second bite at the referendum cherry ever since defeat in 2014.

There have been reports that senior SNP figures, notably former first minister Alex Salmond, may have forced Sturgeon’s hand.

Either way, the SNP leader will set out her plans for “indyref2” at her party’s spring conference in Aberdeen this weekend.

But the northeastern city also explains the first minister’s hesitancy to call a vote, which, if she lost, would spell the end of her political career.

Back in 2014, Aberdeen was a boom town. The Granite City boasted the highest concentration of millionaires in the UK.

Now the streets are lined with half-finished developments and empty shop fronts as the oil price has plummeted. Some 100,000 jobs have been shed in the North Sea.

The falling value of a barrel of crude is not just a problem for Aberdeen. Oil was a key plank of the last referendum pitch.

An independent Scotland would establish an oil fund, and use multibillion pound tax revenue from the black gold to finance building a new state.

Earlier this month, an SNP figure said the country could expect nothing in taxes from the North Sea.

Oil is not the only stumbling block for nationalists. In 2014, the union side won by 10 points, largely on the back of strong “No” votes against independence in more affluent cities such as Aberdeen and Edinburgh.

So far, the middle classes that Sturgeon needs to sway have yet to be moved in large numbers.

If, they ask, Britain is crazy to cut itself off from its biggest trading partner, why does it make sense for Scots to leave a union with which it does 64 per cent of its business?

The question of what currency an independent Scotland would use remains unresolved. After more than half-a-dozen significant votes in the past five years, there is a distinct sense of fatigue among the Scottish electorate, too.

Brexit, however, has radically changed the Scottish political landscape.

Theresa May initially said she was willing to listen to “all options” on Scotland’s place in Europe and the union, but the relationship between the leaderships in London and Edinburgh quickly deteriorated.

Scottish nationalists accuse May and her party of failing to offer any compromise.

In December, the Scottish government published a lengthy paper on Scotland’s place in Europe, surmising that the best deal short of full EU membership was remaining in the single market.

The following month, May announced Britain “could not possibly” stay in the single market.

That there will be no Scottish – or Northern Irish – exceptionalism is in keeping with the tenor of the Brexit campaign.

The Leave side’s winning slogan – “take back control” – was firmly rooted in a unitary vision of British parliamentary sovereignty, with Westminster the undisputed centre of power.

Where the devolved parliaments were spoken of at all, it was in the most fleeting of terms.

A distinctly majoritarian logic is returning to British politics.

Addressing the Scottish Conservative party conference in Glasgow recently, May pledged to fight against further decentralisation of power within the UK and proclaimed the strength of “the precious union”.

Stirring stuff, but it belies the reality that the United Kingdom is a fractured polity and holding it together will require a loose grip, not a firm hand.

The rise of the SNP represents the apotheosis of a long process: the splintering of politics along national lines.

The prime minister sits at the apex of an increasingly reactionary English party.

The strength of the union once rested, in part, in the breadth of unionisms tolerated in different parts of the UK.

That capacious version of unionism is now being replaced by a more full-throated unionism that has had limited electoral appeal north of the border.

The 2014 independence vote in Scotland was determined by a mix of Tory cash and Labour rhetoric (and activists).

Better Together’s message of common class and kinship bonds from Hamilton to Hartlepool was effective, particularly in the former industrial communities that still make up so much of Scotland.

The next referendum campaign will be different. The unionist case will appeal squarely to Britishness.

The pro-union campaign groups that have already emerged are branded in red, white and blue.

Labour is flatlining in the polls and could be torn apart by another referendum.

Conspicuously, Scottish Tories recently adapted their logo to include their official name: Scottish Conservative and Unionist.

Already cash is flowing into the unionist cause. Recently a group called the Constitutional Research Council (CRC) announced it would fund the “No” campaign in the next referendum on independence.

The CRC, which is not a legal entity and refuses to name its members, gave the Democratic Unionist Party £425,000 during the Brexit campaign.

Unionist confidence is based, primarily, on the economic challenges an independent Scotland would face.

Theresa May seems confident that either no vote will be held or, if one does take place, simply pointing at graphs of oil prices will win the day.

But a campaign that comes down to a choice between the SNP and the Conservatives will severely test how strong the 1707 Anglo-Scottish union really is.

May has said there is “no mandate” for a second referendum.

The SNP point out its 2016 manifesto explicitly raised the possibility of an independence ballot if the UK voted to leave the EU against Scotland’s wishes.

Sturgeon’s announcement of her intention to push for a second referendum clearly caught Downing Street by surprise, with May delivering hastily drafted comments about “divisiveness” and “uncertainty”, difficult messages to sustain against the backdrop of Brexit.

If there is a second independence vote, timing will be crucial. May might eventually acquiesce to the vote, but could still dictate the date, question and even franchise, something that Sturgeon is understandably wary of.

A second referendum would create ripples across the Irish Sea. Northern Irish unionists, in particular, feel far less secure on foot of the Stormont results, and might look to play a greater role in the Scottish debate.

But interventions from Ulster rarely play well in Scotland. The SNP has long been wary of drawing any parallels with the political situation in Northern Ireland.

Conservatives, if they are canny, would be similarly cautious of playing the Orange card.

The referendum result is far from foregone. The most recent poll suggests Scots are evenly divided on independence, with younger voters far more likely to favour ending the union with England.

A second defeat would end the Scottish nationalist cause, perhaps forever, and might even presage the arrival of a more muscular, centralising unionism.

Independence would represent a seismic tear in the fabric of the United Kingdom.

Overnight, Northern Ireland would become a rump state, psychologically and politically unmoored from its closest relatives.

It is not for nothing that the Scottish Saltire flies from lamp posts on the Newtownards Road in loyalist east Belfast.

Would the UK survive without Scotland? Almost certainly, at least for a while.

But as English nationalism becomes ever more the centripetal force of British politics, Irish interests are likely to become even more marginal.

Almost two decades on from devolution, Scotland stands at a crossroads.

If Scots do take the highway to independence, the United Kingdom itself could follow in separation, with huge repercussions on both sides of the Sea of Moyle.