Gideon Rachman: The only certain thing about Brexit is deep uncertainty 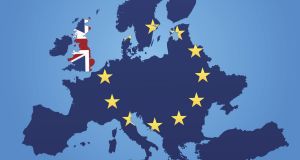 On the edge: article 50 is about to be triggered, beginning Britain’s divorce from the EU. Photograph: Iconeer/Getty

A friend of mine – long separated from his wife and intent on a new life – told me that his stomach still turned over when he opened the letter formally starting divorce proceedings. It will feel a bit like that when Britain invokes article 50 of the Lisbon Treaty, probably this week. The legal process of divorce from the EU will have begun and Brexit will suddenly feel real.

But the sense of certainty created by the triggering of article 50 will, in many ways, be illusory. Brexit is still shrouded by uncertainty. As one UK official closely involved in the process puts it: “Some days I wake up and think it’s all going to be fine. Other days, it feels like a disaster in the making.”

I feel the same way. It seems to me likely that Brexit will work out badly for Britain and fairly badly for the EU. But there are so many different variables involved that nobody sensible can be sure.

There are three main “known unknowns”; first, the negotiations themselves; second, events in the wider world; and third, the unpredictable economic effects of whatever deal is struck.

When it comes to the negotiations, both sides are talking tough. The EU is likely to demand a costly “divorce settlement” of up to €60 billion to settle Britain’s unpaid bills and may refuse to discuss a trade deal until the UK has agreed to pay up.

The early British response has been uncompromising. Boris Johnson, the foreign secretary, has evoked the ghost of Margaret Thatcher. He and the Daily Mail will surely soon follow up with references to Winston Churchill. There is a high chance that the money issue will cause negotiations to break down before they really get going.

However, it is also clearly possible that both sides are bluffing, and will back off. The more realistic voices in the UK government understand the dangers of a “cliff-edge” Brexit in which the parties fail to agree a deal. And there are costs for the EU too. Britain is Germany’s third-largest export market.

But even if the negotiations are conducted in a spirit of compromise, there are big question marks over whether it is technically possible to agree and ratify a new trading relationship within two years. Most experts involved are very doubtful.

Second, world events could radically change the context of the Brexit negotiations, during the two years set aside to strike a deal. A lot will depend on who wins the French and German elections this year. An unlikely victory in France for Marine Le Pen, leader of the far-right National Front, would throw the EU into turmoil.

By contrast, if France is led by the centrist Emmanuel Macron, the EU will be more confident and tougher in its negotiations with Britain. A fresh move towards Scottish independence would rattle Theresa May’s government, as would a serious downturn in the UK economy. The composure and unity of the European side could be shaken by a revival of the euro crisis or a breakdown in relations with Turkey.

With Donald Trump in the White House, the global context is also strikingly uncertain. A sharp move towards protectionism in the US or a war on the Korean peninsula could make Brexit seem like a minor issue within two years. That could persuade the parties to extend the deadline, or even quietly shelve the whole process.

Third, even the negotiators cannot be sure of the real-world consequences of their decisions. Consider, for example, the possibility that there is no new trade deal – and no proper interim arrangement either – and Britain simply leaves the EU and operates under World Trade Organisation rules.

The consequences of that look potentially dire for the UK. They could include big job losses in manufacturing as British exports face tariff barriers in Europe and supply chains are disrupted by hold-ups at customs. The City of London is likely to lose jobs to Europe as the EU changes financial regulations. Tax revenues could fall sharply.

There could also be serious labour shortages in the UK as freedom of movement ends. Pret A Manger, the ubiquitous sandwich chain, revealed last week that only one in 50 of the applicants for its jobs was British. The National Health Service be in need of European doctors. Britain’s universities will lose students and academics.

All of these consequences strike me as entirely possible, even likely. But there could also be unpredictable Brexit effects that cushion the blow.

Take finance: we know that big banks are adept at finding loopholes in regulations and that the flow of business can be surprising. Many predicted that the City of London would suffer when Britain refused to join the euro, but it didn’t happen.

As for universities, Harvard and Yale still seem to attract top academics from Europe, and they are not inside the EU. There could even be surprising side-effects in the car industry if manufacturers choose to build up supply chains within the UK. All of these effects are possible, although I wouldn’t count on any of them.

Looking at all these different variables, my best guess is that Brexit will indeed take place in 2019 and that there will not be a new trade deal in place by that date, or a satisfactory interim deal. That will mean serious disruption and damage for the UK, and some damage for the wider EU. But am I absolutely certain? Certainly not. Nobody can be.