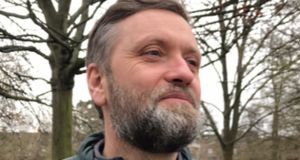 Working Abroad Q&A: Barra Fitzgibbon has lived in London for 20 years and works as a voice-over artist for Channel 4 Television, where he is also the Continuity Creative Manager and finds new voices to use on air.

Your Twitter biography says “I’m the Irish guy on C4 who says filum”. Is that what you do?

That’s exactly what I do and I’ve lost count of the amount of people who’ve rang Channel 4 saying "tell that Irish guy, there’s no ‘u’ in filum!" I’ve also been told in person!

September 1999. My girlfriend at the time, Jenny, (now lovely wife) is from the UK, so there was always a romantic reason to leave. In Dublin I was a qualified solicitor, and in that capacity was approached by RTÉ to appear on a culture panel show called Later on 2. I was on the panel as an expert in immigration law. I ended up presenting the show, and that gave me a taste for telly. I got myself a show-reel, sent it to the main channels In Ireland and the UK. And Channel 4 called me back.

Had you even heard of Channel 4 then or was it all RTÉ?

I grew up on Channel 4. When the competition is between Channel 4’s The Word and RTE’s A Prayer Before Bedtime, what’s a teenager going to choose?

Writing and delivering on-air scripts for Channel 4. I’m the main evening continuity voice of the channel. Following a recent restructure, I’m now also the Channel 4 Creative Continuity Manager. The day-to-day of this job is finding new, diverse voices whom I train and get on air. I also create and develop creative projects in the continuity space, recent examples include Mental Health Week, Transgender Day, International Women’s Day, National Poetry Day.

Have you got your own fans now?

This is not something I seek out, but yeah, I get recognised a lot and I’ll admit it’s always a hoot when it happens.

Do you have kids in London and how do they see themselves?:

That is a great question because I have a split. I have two kids, both born in London. My son Jacob is 17 and sees himself as English through and through. If England play Ireland in the rugby, he’s backing England. My daughter Robyn, 15, is the exact opposite. That girl is Irish. She loves visiting Ireland, she’s genuinely interested in its history. She wears Claddagh jewellery!

I think being Irish instils a respect for Europe. I’ve seen what Europe has done for Ireland as a country, and to be honest I was shocked.

I’d rather not say, but since 2016 I’ve begun to understand the arguments on both sides. There’s a real disconnect in this country between London and the rest of the UK. In London, I think we can be guilty of living in a bubble, something I now recognise, which I think is healthy.

Has anything changed since the referendum?:

There’s no other news, and I worry that little else is getting done at government level. It’s in everyone’s conversation and it’s has put a strain on personal relationships.

Have you noticed any change in attitude towards Irish people there?

Not personally, but I’m hearing testimony of other Irish people feeling different. A friend of mine recently attended hospital and got a bit of a quizzing from the NHS, asking for a utility bill to prove she lived here. That’s certainly different, but it is important to qualify, that’s not my experience, just something I heard.

Has it affected you personally in any way?

The onslaught of news and the inability, so far, to get a deal over the line has affected me personally. I’m a news junkie, so I’m partly to blame, but the prospect of a no deal worries me greatly and I worry for my kids. They’re at an age when soon they’ll be going out into the real world. Just not sure, right now, what that world is going to look like.

If you wanted to come and work in Ireland what are the opportunities for you here?

I see London as my home. This is not something I’ve ever explored. My family is here, my life is here.

What is it like living in London at the moment?

London is an extraordinary place. Full of big problems and amazing things. Its diversity and open arms is something I noticed from day one and that hasn’t changed. It’s brilliant and scary at the same time.

A friend of mine recently attended hospital and got a bit of a quizzing from the NHS, asking for a utility bill to prove she lived here

Has working there given you greater opportunities?

Channel 4 called me, trained me, and gave me this opportunity, so Channel 4, London, the UK....whatever you want to call it, I’ll always see it with rose-tinted glasses. Dublin was very different late 1990’s. It’s not the place people want to leave anymore. There was definitely a mentality amongst my peers to go, get out. Circumstances came together, both romantic and professional. Throw in a bit of luck, a bit of talent and this is where I ended up. Would there have been opportunities in Dublin if I had stayed? I guess we’ll never know.

What are the costs in London like compared to Ireland?

It is much cheaper here. I really notice it when I come back. But it has always been cheaper here. You can still get a pint for well under a fiver. Show me one pub in Dublin that can match that!

What do you think your future holds?:

I take it all day by day. Don’t jump too far ahead. Let’s see where we are on the March 29th and I’ll come back to you!

The classic cliché - the people. The general niceties you come across in a random day. London can be lonely, but then again I love the anonymity. It’s complex. I tell you what I really miss: the choice of amazing brown soda bread. They just don’t do it here.

Would you ever come back?

I’d retire in Ireland. My wife Jen is English and she adores Ireland. However being a pair of confirmed Londoners (although Jen’s originally from Coventry) and I don’t know if we could ever leave this city. Did I tell you I met Jen in a karaoke bar in Tunisia? Maybe next time!