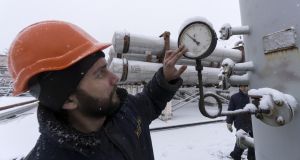 An oil and gas field processing and drilling site in Ukraine. A new agreement to cut production has now gone into effect. Photograph: Vincent Mundy/Bloomberg

Oil prices rose in the first trading hours of 2017, buoyed by hopes that a deal between Opec and non-Opec members to cut production will drain a global supply glut.

International Brent crude oil prices were up 35 cents, or 0.6 per cent, at $57.17 a barrel early on Tuesday. This is close to last year’s high of $57.89, which was hit on December 12th. Oil markets were closed on Monday after the New Year’s holiday.

January 1st marked the official start of the November deal agreed by the Organization of Petroleum Exporting Countries (Opec) and non-Opec member countries, including Russia, to reduce output by almost 1.8 million barrels per day.

Market watchers said January will serve as an indicator for whether the agreement will stick.

“Markets will be looking for anecdotal evidence for production cuts,” said Ric Spooner, chief market analyst at Sydney’s CMC Markets. “The most likely scenario is Opec and non-Opec member countries will be committed to the deal, especially in early stages.”

Libya, one of two Opec member countries exempt from cuts, increased its production to 685,000 barrels per day as of Sunday, up from about 600,000 a day in December, according to an official from the National Oil Corporation.

Elsewhere in Opec, Oman told customers last week that it will cut its crude term allocation volumes by 5 per cent in March.

Russia’s December oil production remained unchanged at 11.21 million barrels per day, but it was preparing to cut that by 300,000 in the first half of 2017 as part of its contribution to the production cut accord.