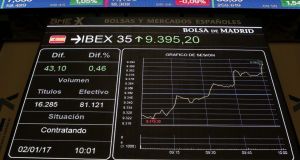 An information panel shows the evolution of Spanish index IBEX35 at the stock market in Madrid, Spain. The IBEX35 dropped a 0.04 per cent at the start of the first trading day of the year, January 2nd, down to 9,348 points. (Photograph: MARISCAL/EPA)

The Euro Stoxx 50 index was 0.4 per cent higher as of 9:40 a.m. in London, while the UK and Swiss markets remained closed for a holiday. The DAX index in Germany, the region’s biggest economy, jumped 0.8 per cent and headed for its best day in almost three weeks.

Italy’s FTSE MIB was up 1.3 per cent Monday. Data showed the country’s manufacturing PMI rose to 53.2 for December versus 52.2 in November, while economists expected 52.3. The FTSE MIB had ended 2016 down 10 per cent, hurt by political uncertainties as well as investor concern over the strength of the country’s banking system.

Euro-area manufacturing expanded last month at the fastest rate since April 2011, in a sign that the currency bloc’s recovery was intact heading into 2017.