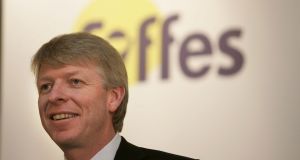 David McCann, executive chairman of Fyffes, is the grandson of Charles McCann, who set up a greengrocers in Dundalk in 1992 to become the first agent in Ireland for Fyffes. Photograph: Dara Mac Dónaill

Members of the McCann fruit and vegetable dynasty have emerged as the real winners on the Irish stock market this year, with Fyffes and Total Produce, each almost 12 per cent owned by the family, topping the list of winners among the Iseq’s largest 20 companies.

Fyffes has surged almost 49 per cent in 2016, with only a few days of trading left, lifted by news early in December that the tropical fruits group had received a €751 million takeover bid from Tokyo-based conglomerate Sumitomo Corporation, which is involved in everything from energy to Japanese shopping channel.

The McCann’s Balkan Investment vehicle, which owns 11.8 per cent of Fyffes, stands to make €87.5 million from the deal, which it is backing. Meanwhile, Total Produce, the fresh produce distributor spun out of Fyffes a decade ago this week, has seen its stock jump 31 per cent in 2016, making it the second-best performer on the Iseq20. The McCanns hold a similar stake in Total Produce.

David McCann, Fyffes executive chairman, and his brother Carl, who holds the same position in Total Produce, are grandsons of Charles McCann, who set up a greengrocers in Dundalk in 1992 to become the first agent in Ireland for Fyffes, the then fledgling London-based banana importer. His descendants went in to take over Fyffes in 1986.

Meanwhile, CRH jumped more than 21 per cent during the year, benefiting from record acquisition spending in 2015, an expected earnings boost from US infrastructure spending following Donald Trump’s election as the next US president, and promotion to the prestigious Euro Stoxx 50 index. The group’s €6.5 billion purchase of assets late last year from French and Swiss rivals Lafarge and Holcim – as they sought regulatory clearance for their merger – is seen by analysts as being transformational for Ireland’s largest publicly quoted company.

Kingspan and C&C each rose almost 5 per cent, despite both being heavily exposed to the UK market in a post-Brexit world, round off the list of five top gainers on the Irish index. Both stocks were initially among the worst hit by the UK referendum outcome.

Permanent TSB and Bank of Ireland have emerged as the two worst performers on the Iseq20, amid concerns over how they can rebuild their loan books following years of shrinkage, how they can build their lending margins further in a low-interest rate environment, and Brexit.

Permanent TSB lost more than 40 per cent of its value and Bank of Ireland almost 32 per cent, despite both having rallied strongly in the latter part of the year in line with banks globally on the back of rebounding bond yields, and as analysts concluded that the State’s help-to-buy plan and the Central Bank’s easing of mortgage restrictions for first time buyers will boost lending next year.

Dalata Hotel Group, Irish Continental Group and Origin Enterprises, down between 15 per cent and 21 per cent, finish off the list of the five worst performers on the index.