FTSE 100 has gained nearly 14% this year, making it the best performer in Europe 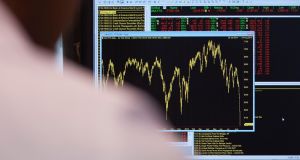 The STOXX Europe 600 index is down about 1.6 per cent this year. Photograph: Lauren Hurley/PA

Britain’s blue-chip FTSE 100 index closed 2016 at a record high level on Friday, with a blistering rally in mining stocks and a sharp fall in sterling after June’s shock Brexit vote boosting the market.

The benchmark index, dominated by global companies, closed 0.3 per cent higher at a life-time peak of 7,142.83 points on Friday, surpassing the previous record of 7,129.83 set in October this year. It surged 14.4 per cent in 2016, outperforming major European indexes by a big margin.

The pan-European STOXX Europe 600 index fell around 1.6 per cent in 2016, while Italy’s benchmark FTSE MIB slumped about 10 per cent. Germany’s Dax and France’s Cac were up 6.9 per cent and 4.7 per cent respectively. Analysts said a sharp fall in sterling boosted the index’s export-oriented companies, which generate a large portion of their revenues in dollars. The resilience of the economy also helped in improving sentiment. “The latest GDP figures point to a strong UK economy which has probably accounted for some of the pick-up in equity prices overall since the referendum,” said Yael Selfin, head of macroeconomics at KPMG UK.

“So far major UK stocks appear to have defied pre-referendum predictions ... Most market watchers and participants agree this is thanks to the fall in sterling since 23 June as a number of the UK’s largest companies generate a large portion of their revenues in dollars,” KPMG said.

The FTSE’s climb was also due to a strong rally in the mining sub-index, which jumped 101.5 per cent in 2016 on stronger metals prices and expectations that US president-elect Donald Trump will keep his election pledge to boost infrastructure spending in the United States.

However, the country’s domestically-focused mid-cap index ended 0.3 per cent higher on the day. It recorded a 3.7 per cent gain for the year, underperforming the FTSE 100, as domestic firms did not get the benefit of a weaker currency.

Concerns about higher inflation also hurt sentiment. Shares in miner Anglo American have surged 287 percent in 2016, followed by a 207 percent jump in miner and trader Glencore and a 72 per cent rise in global diversified miner BHP Billiton. Energy stocks also performed well this year following a recovery in crude oil prices, with the UK oil and gas index spiking 50 percent in 2016.

The second half of 2016 also saw a sharp rebound in banking stocks as an improving global economic outlook, a rising US rate environment and hopes of a lower level of regulation in the United States after Trump’s victory prompted investors to return to so called cyclical stocks. The UK banking index surged nearly 40 per cent in the second half, and closed the year up more than 8 per cent.