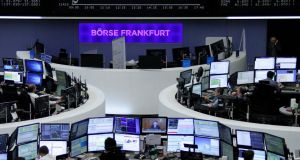 European shares rose the first day of trade in 2017, aided by data showing better-than-expected manufacturing performances across the euro zone.

While Dublin, London and Wall Street stayed closed for what was a holiday in many countries, a number of European markets opened.

In Germany, the region’s biggest economy, the DAX index jumped 1 per cent in its best day since mid-December. German shares were led by gains in lender Commerzbank AG and carmaker Volkswagen AG.

IHS Markit’s 2016 manufacturing Purchasing Managers’ Index for the euro zone registered 54.9 in December, its highest since April 2011. That was well above both the 50 mark which separates growth from contraction, and above November’s 53.7.

“It’s nice to see some good economic numbers on the first trading day of the new year. It has improved sentiment and could help the market to set new highs in the coming months,” said Koen De Leus, chief economist at BNP Paribas Fortis.

“However, the road ahead looks bumpy because of several political risks in Europe. Overall, I am positive on European stocks this year as valuations are quite attractive compared to the US and company margins are slowly improving, helped as well by the cheap euro.”

Italian shares were also boosted by a rally in the country’s lenders. The Italian banking index rose about 2 per cent, supported by a 5.6 percent jump in Banco BPM on the first day of trading for the newly merged bank.

Banco BPM said on Monday that the new lender, created after a merger between Banco Popolare and BPM, started with a share capital of €7.1 billion.

Other Italian banks were also up, with shares in UniCredit, UBI Banca and Mediobanca up between 2.1 per cent and 3.5 per cent. Trading was thin, with volumes at 8 per cent for the CAC index and 13 per cent for the euro STOXX 50 of their 90-day daily averages in the first two hours of trading.

The French and German markets actually began the day on a weak note, with both slipping as investors shied away from stocks such as chipmaker Dialog Semiconductor.

It lost ground in the morning on the back of an Apple statement late on Friday saying that the high-tech giant planned to cut iPhone production by 10 per cent in the opening quarter of 2017.

Dialog Semiconductor supplies micro-chips to Apple. The company’s price was down 0.34 per cent at €39.82 at the end of the day.

The markets’ performance and goods news on the manufacturing front failed to bolster the euro, which began 2017 by weakening against sterling and the dollar.

A number of pundits are predicting that this year the euro will hit parity with the dollar for the first time since December 2002, less than a year after the notes and coins were first introduced.

Such a move would aid Irish exports to the US and help make the Republic attractive to tourists and investors.