In Dublin, Ryanair Holdings among shares to gain on hopeful Covid-19 news 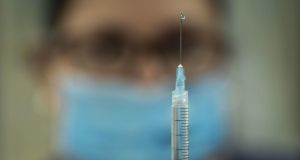 A health professional prepares a needle during human trials for a Covid-19 vaccine in Brisbane, Australia. Photograph: Glenn Hunt/EPA

Good news from Covid-19 vaccine trials boosted markets on Wednesday. Both US group Moderna and the University of Oxford-Astrazeneca joint venture reported progress on their efforts to find a way of inoculating against the virus.

Ryanair Holdings shares took off as hopes grew that a Covid-19 vaccine may not be far off, easing pressure on European and global carriers. The airline group’s stock closed up 9.84 per cent at €11.83 after touching €11.93 shortly before trade ended.

International building materials group and index heavyweight CRH added 2.56 per cent to €33.30 as the news also lifted construction-related stocks around the world.

Pharmaceutical group Astrazeneca rose almost 6 per cent to 9,053.23p following reports in a medical journal that it would publish positive results on a potential coronavirus vaccine it has licensed from the University of Oxford Grafton added 2.76 per cent to 6.88p on generally positive sentiment towards construction-related stocks. The group’s shares are traded in London.

Luxury goods maker Burberry shed 5.6 per cent to 1,470p after saying it would axe 500 jobs in Britain and elsewhere to save £55 million.

German breathing equipment and medical equipment maker Drägerwerk surged 11.28 per cent to €86.80 after upping guidance on its likely financial performance this year.

Dutch micro-chip maker ASML Holding fell 3.67 per cent to €330.70 despite reporting increased second-quarter profits and sticking by previous forecasts for this year.

Germany’s benchmark Dax increased by 1.84 per cent, while the French equivalent, the CAC, moved 2.03 per cent higher.

Drug maker Moderna’s shares surged by more than 12 per cent shortly after positive results from its initial coronavirus vaccine trials, but it had shed more than half those gains by 6pm Irish time, when its stock was 5.66 per cent ahead at $79.33 US dollars.

Wall Street gained as reports of the positive data emerged. Goldman Sachs added 1.4 per cent when it revealed that second-quarter trading revenue doubled. Morgan Stanley gained 0.6 per cent and Bank of America 1.1 per cent ahead of their results on Thursday, which would wrap up earnings from the big six US banks. The broader banking index added 2 per cent.

UnitedHealth Group fell 0.3 per cent after warning of rising costs later this year as Americans catch up on less urgent surgeries halted by the coronavirus pandemic. Additional reporting: Reuters