Mining group blames sea conditions for fall, expects improvement in second half of 2020 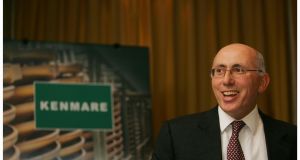 Kenmare Resources managing director Michael Carvill. At the end of June, Kenmare had cash of $98.6m and gross debt of $151.3m, resulting in net debt of $52.7m. Photograph: Bryan O’Brien

Mining group Kenmare Resources said shipments of finished products fell almost 30 per cent in the second quarter as a result of poor sea conditions as it built up cash to almost $100 million (€88 million).

The Irish company, which operates the Moma Titanium minerals mine in northern Mozambique, said total shipments came to 219,100 tonnes in the second quarter, although that was a 13 per cent increase on the first three months of this year.

The company expects shipping volumes to increase in the second half of this year “due to seasonally calmer sea conditions”.

From its Mozambique mine, Kenmare produces titanium minerals such as ilmenite and rutile which are used to make titanium dioxide pigment to manufacture paints, plastics, paper, cosmetics, food additives, ceramics and textiles.

The company has been progressing three development projects to increase ilmenite production to about 1.2 million tonnes per year.

“We expect the market to be more subdued in the second half of the year, as the pandemic impacts both demand and supply of titanium feedstocks, but the long-term fundamentals for all of our products remain strong,” said Michael Carvill, the company’s managing director.