Dublin closes higher as banks bounce back and CRH, Ryanair and Dalata all gain 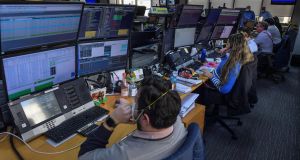 European shares rose on Friday after upbeat industrial output data from Italy and France raised hopes of an economic recovery, even as a spike in coronavirus cases around the world kept gains in check.

The Iseq index closed the week in positive territory, ending up 1 per cent led by the banks, which bounced back after a punishing few days.

Bank of Ireland was up 3.8 per cent after losing significant ground earlier in the week. AIB closed 3 per cent higher.

Ryanair rose 0.6 per cent after Irish crew voted to accept a temporary 10 per cent pay cut due to the Covid-19 crisis, while hotels group Dalata climbed 3.4 per cent after it confirmed a new debt facility.

Other movers of the day included Iseq heavyweight CRH, which was rose nearly 3 per cent, insurer FBD up just over 3 per cent, and boxmaker Smurfit Kappa up 1.4 per cent.

Housebuilders Glenveagh and Cairn also ended the week on a high, up 4 per cent and 1.7 per cent respectively.

The blue-chip FTSE 100 edged about 0.8 per cent up on the day, propped up by a rebound in heavyweight financial stocks. For the week, it lost about 1 per cent. The mid-cap FTSE 250 closed up 1.2 per cent, while shedding 0.7 per cent over the week.

Homebuilding stocks such as Persimmon and Barratt Development were among the best performers for the week after new stimulus measures from the UK government looked to greatly benefit the sector, which is expected to recover later in the year.

Cardboard packaging maker DS Smith underperformed its blue-chip peers for the week, bogged down by a string of price target cuts after it disappointed on dividend payments last week.

Breaking a three-day losing streak, the pan-European STOXX 600 closed up 0.9 per cent, with Italian shares leading with a 1.3 per cent jump. Banks, auto stocks and food and beverage companies were among the biggest gainers on the day.

Danish brewer Carlsberg rose 6.4 per cent after it said its expected a smaller-than-forecast drop in first-half profit as its main China market had rebounded strongly during the second quarter.

The healthcare index declined as GlaxoSmithKline lost 1.1 per cent after the US Food and Drug Administration said on Friday it was unclear whether the benefits of GSK’s experimental treatment for multiple myeloma outweigh the risks ahead of a review of a side effect which affects the eyes.

The S&P 500 and Dow rose in choppy trading on Friday, boosted by financial stocks, but the sentiment was fragile as a record rise in coronavirus cases in the US threatened to further damage corporate America. Technology stocks weakened, dragging the Nasdaq from its third record closing high this week.

Gilead’s shares rose 2.5 on data showing its antiviral remdesivir significantly improved clinical recovery and reduced the risk of death in Covid-19 patients in a late-stage study.

Bank of America, Citigroup, JPMorgan Chase and Goldman Sachs rose between 2.7 per cent and 3.4 per cent ahead of their financial results next week, which would mark the onset of the second-quarter earnings season.

Carnival jumped 9.4 per cent after the cruise line operator said it was planning to resume operations in a phased manner, and would operate with a smaller fleet on its return.