Crisis-era tools to bring relief for banks in France, Italy and Germany 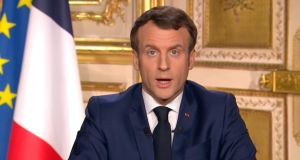 Relief is on the way for banks in France, Italy and Germany, as the region’s biggest economies resort to crisis-era tools to limit the damage from the coronavirus.

French president Emmanuel Macron, invoking a state of war, said the country will guarantee as much as €300 billion of bank loans to companies – almost a third of the total – and give repayment support. It was a move echoed in Italy, which approved a package of guarantees and funds on Monday that will leverage about €340 billion in financing. Germany is also promising €550 billion of aid, an amount equal to almost half Deutsche Bank’s balance sheet.

More than a decade after the financial crisis, Europe’s largest economies are seeking to avert a bailout of the still-feeble banking industry by guaranteeing lenders won’t be on the hook for a surge in soured loans as companies from small-town restaurants to global airlines grind to a halt after the outbreak. Banks have been among the hardest hit in Europe’s recent stock market sell off, with shares down by about a third since the beginning of the month.

For European banks – some of which are still grappling with the aftershocks of the last crisis – the economic upheaval caused by the coronavirus could hardly have come at a worse time. Income from lending has been whittled down because of negative interest rates and growth in regional economies has been anemic. At the same time, they’re confronting rising competition from fintechs and US banks that were bolstered by rising rates until recently.

The virus outbreak risks derailing the recovery of some lenders. Deutsche Bank, after years of failed turnaround, management tumult and low profitability, had been showing signs of stability under chief executive Christian Sewing and was beginning to regain investor confidence. Italy’s UniCredit had reduced a once-huge pile of bad loans and in its latest business plan had signalled that it would consider share buybacks in the future.

France’s loan guarantees come in addition to plans already announced to expand guarantees for loans to small businesses using the state investment bank BPI. In Italy, most of the funds will be used to freeze loan repayments by small and medium-sized companies until September 30th, while a state guarantee fund for small and medium enterprises will be boosted by €1 billion and state lender Cassa Depositi e Prestiti will be allowed to guarantee at least €10 billion in loans through a new-set Treasury fund.

“Guaranteeing the stock of outstanding loans can help banks to resist the pressure to cut credit lines,” Hans-Peter Burghof, a professor of banking at the University of Hohenheim in Stuttgart, said by phone. “We need to hand more power back to the individual banker to let them act in the interest of good clients who have a future.”

One positive for the banks in the current crisis is that they can point to external circumstances rather then self-inflicted wounds. Last time around, financial firms were at the epicenter of the crisis after lax underwriting standards caused a surge in lending to homeowners with questionable credit quality. Related risky derivatives bets by hedge funds on the housing market compounded the issue. Since then, European banks have been forced to bolster their balance sheets and build up capital.

“Banks’ savings grace is their balance sheets have rarely been stronger,” SandP Global Ratings credit analyst Bernd Ackermann said in a note to clients. “Core capitalisation is at record highs, funding profiles have generally solidified, and asset quality is either excellent or improving.”

The French guarantees represent almost a third of the €1 trillion of drawn credit outstanding at French businesses at the end of January, according to the Bank of France. The biggest chunk of that, about €429 billion, was for real estate activities. Businesses that have been hit hardest by the crisis accounted for smaller amounts, with €32 billion of loans outstanding at companies that provide accommodation and food services, and about €50 billion in transportation and storage sectors. Industrial companies had €135 billion of loans and wholesale and retail business €140 billion.

While helping banks coping with the crisis, governments are also loosening rules to allow companies stay solvent throughout the shutdown. Italy is extending its temporary-layoff support fund to smaller firms; Germany is relaxing legislation that forces companies to file for insolvency within three weeks of getting into financial stress.

The UK and Spain are considering similar measures to support lenders and firms.

There are also signs that the European Union is willing to be flexible on its rules to help out the banking industry. In internal guidelines seen by Bloomberg, the European Commission reiterated that banks could receive aid without the usual strings attached like investors taking a hit – to compensate for “direct damage” suffered as a result of the virus outbreak. Loan guarantees and subsidies on interest rate payments for companies could also be an ‘’appropriate, necessary and targeted solution,” it said.

Rising non-performing loans aren’t the only risk factor for European lenders, many of which are also exposed to Italy’s stressed financial system. European banks are holding more than €446 billion of sovereign and private Italian debt, based on a Bloomberg analysis of European Banking Authority data. As the coronavirus outbreak spreads to other countries, the Italian debt will be a double burden to financial systems dealing with economic pressure at home.

French banks are the most exposed among non-Italian lenders if a sell-off in Italy starts to spread through Europe’s financial system. The country’s two largest banks, BNP Paribas and Credit Agricole own retail units in Italy. Societe Generale is already in the throes of its own restructuring of its investment bank, paring back riskier activities and cutting jobs.

The coronavirus outbreak will also pile further pressure on European banks struggling to adapt to the new global reality. Germany’s Commerzbank needs to further overhaul its business model and intensify cost cuts, according to a government-commissioned review that was drawn up before the recent outbreak after a request from the German government. Boston Consulting Group said the bank should move more quickly toward a digital strategy and make deep cuts to its branch network.

Many bankers across the continent – including top executives and CEOs – have also called for European regulators to do more to facilitate more mergers and acquisitions in the industry. Last year, Commerzbank and Deutsche Bank started merger talks, only for negotiations to fall apart when Sewing realized the execution risks of the deal. – Bloomberg