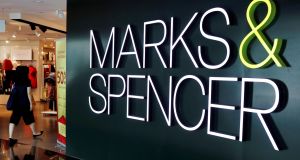 Marks & Spencer ended marginally lower after jumping nearly 8 per cent earlier in the session. The chain reported a plunge in first-half earnings but like-for-like sales growth in its food business. Photograph: Reuters

European stocks scaled a fresh four-year peak on Wednesday driven by a surge in shares of consumer-focused companies that helped offset declines in autos and miners, while investors awaited new developments from US-China trade talks.

The Iseq was little changed, finishing down less than 0.1 per cent. Kerry rose 2.6 per cent to €113.90 after it reported volume growth and margin expansion across its food businesses. The stock also rose in tandem with upward moves in its sector for companies such as AB Foods and Danone.

Permanent TSB advanced 2.7 per cent to €1.13 after the bank said new mortgage lending rose at an annual rate of 17 per cent during the third quarter, outperforming the rate of expansion in the market.

Green Reit nudged up 0.2 per cent to €1.91. The High Court has now approved the scheme of arrangement between Green Reit and its shareholders that will cement its €1.34 billion takeover by UK property company Henderson Park.

Ryanair continued its rise, finishing 1.6 per cent higher at €13.75, while CRH was 0.7 per cent lower at €33.28 after a downbeat update from cement-maker Vulcan Materials.

The FTSE 100 edged up 0.1 per cent as investors waited for news on US-China trade talks before making further bets. A weaker pound boosted exporters British American Tobacco, Unilever and Diageo, but small-cap Intu Properties slumped 17.1 per cent after saying it may need to raise additional cash.

Mothercare shares leapt 33 per cent on their best day in nearly two decades, helping it claw back all the losses that followed Monday’s notice of intent to appoint administrators for its UK operations. The baby products retailer shut all its UK stores and laid out plans to return the rest of the company to profitability by fiscal 2021.

In the same sector, Marks & Spencer ended marginally lower after jumping nearly 8 per cent earlier in the session. It reported a plunge in first-half earnings, but like-for-like sales growth in its food business.

A 4 per cent rise in shares of Brenntag boosted the chemicals subsector after the German distributor posted better-than-expected third-quarter profits.

Adidas was among the few disappointments, down 5 per cent after the German sportswear company said its third-quarter growth was held back by a weaker performance from Yeezy shoes designed by Kanye West.

Among the main drags, car makers fell 0.3 per cent with BMW’s better-than-expected third-quarter results doing little to cheer up the sector. Banks ended flat after rallying as much as 1 per cent earlier in the day after French lender Societe Generale raised its capital ratio.

Wall Street stocks declined after reports that any signing of a partial trade deal with China won’t happen until at least December. Treasuries rebounded after dropping for three days.

Multiple large stakes in Uber Technologies changed hands, pushing the shares down to an all-time low, as post-IPO selling restrictions for early investors and insiders lifted. The stock dropped as much as 8.7 per cent in New York, touching a new all-time low.

Xerox rose 2 per cent after it was reported by the Wall Street Journal that it is considering a cash-stock offer for computer giant HP, which is currently valued at $27 billion. HP rose 0.4 per cent. – Additional reporting: Reuters/Bloomberg.