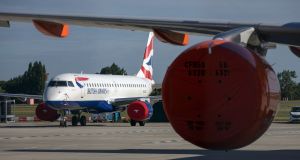 European markets were muted on Thursday as some stocks lost part of the gains made a day earlier. Dealers said there was mixed reaction to the European Central Bank statement on its plans to stimulate the economy following months of coronavirus lockdowns.

Ryanair shed 2.96 per cent to close at €11.48. Dealers noted that airlines across Europe lost altitude on Thursday following investors’ rush to back them the previous day on positive news from coronavirus vaccine tests.

The Irish airline group hit a low of €11.40 late in the after before recovering some of those losses as the market closed.

Insulation and building materials specialist Kingspan had a good day, adding 1.92 per cent to €63.75. Traders said there was no stock specific news behind the performance, but suggested that positive news from UK group Marshalls may have influenced the move.

Housebuilder Cairn Homes ended the day 2.87 per cent down at 84.5 cent. Rival Glenveagh Properties lost 1.83 per cent to close at 69.7 cent.

The FTSE 100 fell 0.7 per cent, while the domestically focused FTSE 250 ended 0.6 per cent lower. Building materials group Marshalls gained 1.13 per cent to 627 pence sterling after saying demand in June was good. Irish rival Grafton, whose shares are traded in London, inched up 0.15 per cent to 689p following a strong performance on Wednesday.

IAG, the owner of Aer Lingus and British Airways, slipped 2.27 per cent to 224.1p, losing some of the ground made the previous day.

GVC Holdings, owner of bookies Ladbrokes and Coral, tumbled 3.7 per cent to 879p after chief executive Kenny Alexander announced he was leaving the business. Chief operating officer Shay Segev will succeed him.

Irish convenience foods group Greencore climbed 5.74 per cent to 115p. The company’s creditors agreed to waive debt-to-earnings conditions governing some of its debt.

The pan-European Stoxx 600 closed down 0.7 per cent after falling as much as 1 per cent during the session.

On Wall Street, the S&P 500 slipped from a five-week high as data showing elevated levels of US unemployment claims highlighted concerns about the economic toll from rising US coronavirus cases.

Bank of America fell 1.7 per cent after its second-quarter profit more than halved, while Morgan Stanley rose 3.5 per cent after posting a record quarterly profit.

American Airlines dropped 5.2 per cent as it sent 25,000 notices of potential furloughs to frontline workers and warned that demand for air travel is slowing again.

Electric vehicle manufacturer Tesla slipped 4.5 per cent as its vehicle registrations nearly halved in the US state of California during the second quarter.

Tech stocks Apple, Google-owner Alphabet and Microsoft all declined in early trading, while Netflix was in positive territory ahead of the publication after the close of trading of its quarterly results.