Bank of America profit more than halved in second quarter 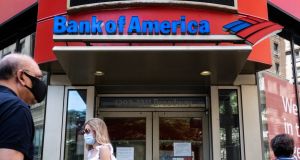 Pedestrians wearing protective masks walk past a Bank of America branch: it has set aside $5 billion to cover loan losses. Photograph: Jeenah Moon/Bloomberg

Bank of America saw its profit more than halve in the second quarter as it set aside $5 billion to cover potential loan losses, while warning that it would struggle as long as interest rates stayed low.

The Charlotte, North Carolina-based lender is especially vulnerable to rate movements because of the composition of its balance sheet and at least one analyst expressed concern about its net interest income, down 11 per cent.

Shares in the bank fell about 4 per cent in response to the results.

“When both long term and short term interest rates are at their historical lows as they are today. That spread is lower, and we make less money,” chief financial officer Paul Donofrio said.

The fall in revenue and profit was broadly in line with other Main Street peers that have suffered from the need to brace for a deep recession, while profiting from the surge in financial market trading since February.

The bank allocated a much lower dollar amount for reserves this quarter than some of its peers earlier in the week, in part due to it having set aside more in the previous quarter. Its provision expense rose just 7 per cent in the second quarter, compared with a 26 per cent increase at JPMorgan Chase, a 12 per cent jump at Citigroup and a 138% jump at Wells Fargo.

6 Checking in? No thanks. I’m just here to use the wifi