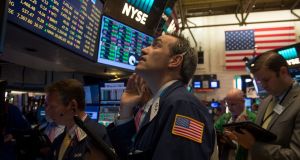 Wall Street: US stocks were lower in early afternoon trading on weak jobs data from the private sector struck investors’ fears about rising tension in the Korean peninsula

European shares fell on Thursday to their lowest in 11 weeks after minutes from the ECB’S latest meeting showed the central bank had left the door open to scrapping its bond-buying pledge.

Packaging group Smurfit Kappa tumbled 2.73 per cent to €26.73 after Goldman Sachs analysts downgraded the stock to “neutral” from “buy” and lowered their share price target to €29. The shares were down 2.4 per cent in early trade in Dublin.

Smurfit’s price had risen by almost 24 per cent this year, making it one of the biggest gainers on the Iseq 20 index.

Apart from that, dealers said a climb in bond yields aided banks but left other stocks subdued. AIB bucked this trend, falling 3.14 per cent to close at €4.96.

The lender has enjoyed a strong run since the Government relaunched part of its stake in the company on the market last month.

Bank of Ireland added 0.84 per cent to 24 cent ahead the consolidation of its shares on Friday. Home lender Permanent TSB climbed 2.61 per cent to €2.75.

Building materials giant CRH shed 1.93 per cent to €31.34. Construction-related stocks were weak throughout Europe on Thursday.

Insulation specialist Kingspan was also affected, dropping 2.08 per cent to €30.10.

Penney’s owner Associated British Foods rose 75 pence sterling or 2.57 per cent to 2,997p to hold the top spot on the FTSE 100. The retailer upped its full-year outlook after reporting a 20 per cent rise in revenues at actual exchange rates, boosted in part by the Brexit-hit pound.

Reckitt Benckiser shares slumped 117p or 1.52 per cent to 7,583p after the household goods giant warned of a permanent hit to sales following last month’s massive worldwide cyber attack which wrought havoc across its factories.

Shares in Bovis Homes Group dropped by 3.5p or 0.36 per cent to 966p after the company revealed it would set aside another £3.5 million to deal with customer complaints over the poor quality of its homes. The house builder has already set aside £7 million to cover remedial work and compensation for affected customers.

The pan-European STOXX 600 ended the session 0.7 per cent lower, recovering some of its losses with all but three sectors closing in negative territory. Euro zone blue chips also hit an 11-week low.

Banks were a bright spot, having been recently underpinned by talk of tightening monetary policy conditions. They were the top-gaining sector, up 0.7 per cent. Italian lenders were the top performers, up 1.8 per cent following a series of deals in the last two weeks that have restored confidence in the sector’s prospects.

Commerzbank gained 3.3 per cent to end the day at €11.20 after a Bloomberg report said that buyout firm Cerberus was considering buying a minority stake in the German lender through purchases on the market.

Sodexo SA led travel-and-leisure shares lower, after dropping its full-year revenue growth forecast for the second time. It closed 6 per cent down at €106.75.

US stocks were lower in early afternoon trading on weak jobs data from the private sector struck investors’ fears about rising tension in the Korean peninsula.

Shares of Tesla fell 4.4 per cent after the luxury electric carmaker’s Model S did not get the top score in certain tests by the Insurance Institute for Highway Safety. General Electric slipped 3.1 per cent after the European Commission accused the company of providing misleading information during a merger deal. L Brands slumped 13 per cent after the Victoria’s Secret owner’s June sales came in below expectations.