Markets report: Aryzta, BoI and PTSB fall but Malin bucks the trend on ISEQ to add 4.8% 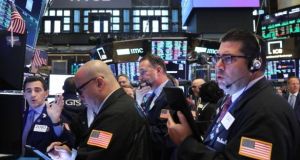 European shares slipped on Tuesday as the blame game over who would be responsible for the UK failing to get a Brexit deal went into overdrive and investors monitored risking trade tensions between the United States and China.

Aryzta lost 4.9 per cent to 64 cent, as the Swiss-Irish bakery group reported a 1.5 per cent fall in group revenue for the year to July, to €3.38 billion.

Banking stocks were mainly out of favour, with Permanent TSB giving up 3.1 per cent to €1.18 and Bank of Ireland falling by 1.53 per cent to €3.61, as sector-followers monitored developments relating to Brexit.

Ryanair dipped by 1.4 per cent to €10.73, as rival EasyJet said it expected capacity growth in 2020 at the lower end of its historic range.

Bucking the trend, Malin added 4.8 per cent to €4.40, as it emerged that US hedge fund Pentwater Capital was the buyer of the 23 per cent stake in the life science investment company that was sold in recent weeks by troubled UK asset manager Woodford Investment Management.

The FTSE came off 0.8 per cent, amid a sell-off in shares of companies perceived to be most exposed to a fallout from a no-deal Brexit. An index of retailers slipped 2.5 per cent on its worst day in over four months, with Tesco falling 3 per cent, and homebuilders losing 1.3 per cent.

Aside from Brexit, the China-US trade talks, scheduled for October 9th and 10th, could also make or break stock market performance this week. However, mixed signals from Washington, which expanded its trade blacklist of Chinese companies, have done little to settle investor nerves in the run-up to the meetings.

The London Stock Exchange fell 5.8 per cent after Hong Kong Exchanges and Clearing scrapped its unsolicited $39 billion (€35 billion) offer, leading shares of the UK bourse operator to levels not seen since last month when HKEX first announced the takeover plans.

EasyJet was the biggest drag on the FTSE 100 with a 7.5 per cent slide, while Aer Lingus and British Airways owner IAG also lost nearly 2 per cent.

Germany’s export-reliant DAX fell 1.1 per cent, with an unexpected rise in August industrial output providing little relief from fears of the economy slipping into recession.

Energy firm Uniper slumped 8.5 per cent as Finnish utility Fortum got closer to full ownership of the German firm, a move Uniper’s top management had warned could threaten the firm’s credit rating.

At the other end, shares of Airbus rose 0.4 per cent after the planemaker reported higher orders for the first nine months of the year, putting it well ahead of US rival Boeing. Boeing’s sales have been hampered by the grounding of its fast-selling jet, the 737 MAX, in the wake of two accidents in Indonesia and Ethiopia.

US stocks were also out of sorts in early afternoon on concerns over US-China trade relations. The widening of the US trade blacklist to include Chinese video surveillance firm Hikvision and surveillance equipment maker Zhejiang Dahua Technology among others, drew a sharp rebuke from Beijing. This pressured US suppliers. Intel, Nvidia, Western Digital, Seagate Technology and Ambarella declined.

The Dow Jones Industrial Average was also weighed down by a fall in shares of Boeing.

Investors will now focus on third-quarter earnings season beginning next week and analysts expect the worst quarterly profit performance since 2016, with earnings from S&P 500 companies declining nearly 3 per cent from a year earlier, based on Ibes data from Refinitiv.