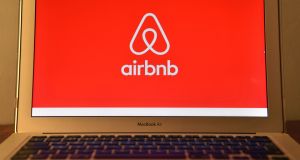 The Airbnb logo is displayed on a computer screen. Photograph: Carl Court/Getty Images

Airbnb’s long-awaited Wall Street debut is officially earmarked for 2020, but the home-share startup is charting an unconventional path to the public markets.

San Francisco-based Airbnb is laying the groundwork for a direct listing rather than an initial public offering, according to people familiar with the matter who asked not to be named discussing private information. Airbnb declined to comment.

Technology startups usually choose a traditional IPO to tap into the public markets. Some of the new generation of tech firms have spent years raising private funds and don’t necessarily need money from an IPO to expand their business, but are looking for a way to let employees and investors cash out. A direct listing allows companies to lower the millions of dollars they typically pay to investment banks in underwriting fees, because they don’t issue any new shares and don’t raise any new capital. Instead, they let the market choose the price. Slack Technologies, Inc. and Spotify Technology have taken the direct listing route.

An IPO would also force Airbnb to open its books to investors. The We Co., which was supposed to have an IPO this fall, had to withdraw its plans after some investors took a look and were highly critical. Amid the ensuing scrutiny, the CEO was forced to resign and financial advisers said WeWork’s potential valuation would likely fetch only about a quarter of its earlier $47 billion (€43 billion).

On Tuesday, hundreds of venture capitalists and executives from private companies will meet in Silicon Valley to discuss the benefits of direct listings. The event is sponsored by 12 venture capital firms and will include Mike Moritz of Sequoia Capital, the biggest venture capital backer of Airbnb, Benchmark’s Bill Gurley and Spotify’s Chief Financial Officer Barry McCarthy.

With a private valuation of $31 billion, Airbnb is likely to be a topic of discussion. It’s slated to be one of the most high-profile companies to go public next year.

Airbnb executives have been talking about an IPO since at least 2018 and the extended timeline has caused tension inside the company. Last summer, a handful of former employees sent a letter to Airbnb’s founders pleading for a public offering so they could sell their stock options -- some of which start expiring in November 2020, according to the New York Times. Earlier last year, Chief Financial Officer Laurence Tosi left the company after butting heads with Chief Executive Officer Brian Chesky, in part over the timing of the IPO.

Last month, Airbnb officially announced it would go public in 2020 in a one-sentence press release. The company didn’t give any additional details on the timeline or whether it intends to file for an IPO or take the direct listing route. So far this year, Airbnb’s fellow tech unicorns that have gone public have received a chilly reception. Uber Technologies Inc. is trading at 30% below its IPO price, Lyft Inc. is down more than 40% and Slack is down almost 8%.

Unlike these unprofitable companies, Airbnb has a stronger financial position. In the last quarter, it pulled in more than $1 billion in revenue and the company has said its earnings before interest, taxes, depreciation and amortization were positive in both 2017 and 2018.

“What we’ve seen with Uber, Lyft and the other big ones is that when you’re private for so, so long, you don’t get any honeymoon by the time you go public,” Tusk said. “Given the struggles so many tech companies have had in the past year and a half, it’s not shocking they might want to try something different.”

As Airbnb prepares for its entrance into the public markets, one of its major hurdles is solving outstanding regulatory issues in some of its biggest markets, like Paris and New York City, where its business model of short-term home rentals has been at odds with the city for a decade. Investors want Airbnb to solve its regulatory battles before going public since failure to do so could cast doubt on the company’s valuation.

David Hsu, a professor at the University of Pennsylvania’s Wharton Business School, says that bypassing the roadshow that goes hand-in-hand with a traditional IPO means Airbnb “wouldn’t have to retell the story and expose wounds that are already there.”

However, the company could experience more price volatility in its stock because it hasn’t been as well vetted and wouldn’t have the support of an underwriter. “The direct listing is super new but it may well be appropriate for Airbnb,” Hsu said. “They are already a well-known business model because lots of people have stayed in an Airbnb so this theoretical danger of volatility in the price may not be that significant.” - Bloomberg