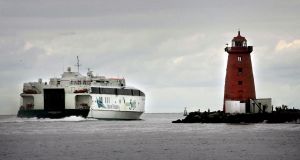 European shares pulled back from their highs in late trading on Tuesday as US Federal Reserve chairman Jerome Powell signalled that the risks facing the country’s economy had risen “materially” as the coronavirus spread.

The comments took away from an initial positive market response to the Fed’s decision to cut interest rates by half a percentage point in an emergency move to cushion the impact of the epidemic.

Travel-related stocks were in demand as bargain hunters emerged from the sidelines, with ferries operator Irish Continental Group gaining 4.4 per cent to €4.01 and Ryanair edging 1.9 per cent higher to €11.88.

Bucking the trend, Bank of Ireland lost 2.6 per cent to €3.20 and AIB, which reports full-year figures on Friday, declined by 2.3 per cent to €1.96, amid concerns that a fresh round of rate cuts by central banks will further squeeze incomes across the sector.

Banks ended the day in the red, down 2.13 per cent, while miners and airlines up between 2.2 per cent and 2.8 per cent, after they were caught up in last week’s rout that erased over $5 trillion (€4.5 trillion) from global equity markets.

Marketing firm 4imprint Group jumped 15 per cent after saying it had so far seen minimal impact from the health crisis.

Aggreko, the world’s largest temporary power provider, surged 5 per cent and was eyeing its best day in over seven months as it kept its 2020 targets and said preparations for the Tokyo Summer Olympics were “progressing well”.

Spanish banks powered a 0.8 per cent rise for the Madrid bourse after the European Court of Justice ruled that it would be up to local judges to decide on a case-by-case basis if contentious mortgage clauses in the country were abusive.

Caixabank and Bankia rose 0.6 per cent and 3.7 per cent, respectively, on relief that the court did not decide on a blanket rejection of the clause.

German wholesaler Metro soared 19.2 per cent after US food distributor Sysco contacted the company about a potential takeover.

Qiagen jumped 17 per cent after US firm Thermo Fisher Scientific launched a €10.4 billion bid for the German genetic testing company.

US stock markets were lower in early afternoon trade on worries that even a half percentage-point cut in interest rates might not be enough to stave off the economic impact of the coronavirus outbreak and halt the worst sell-off in more than a decade.

It was the Federal Reserve’s first emergency rate cut since the 2008 financial crisis, underscoring how grave the central bank views the fast-evolving situation.