Markets report: Iseq was virtually flat on the day with Ryanair amongst losers 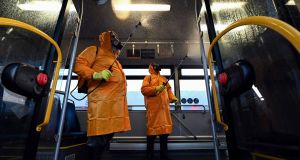 Equity markets around the world surged on Monday as the prospect for central banks cutting interest rates to soften the economic blow of the coronavirus buoyed investors.

Equity markets around the world surged on Monday as the prospect for central banks cutting interest rates to soften the economic blow of the coronavirus buoyed investors.

Another volatile day in Dublin trading closed with the flagship Iseq all-share index falling just slightly by 0.15 per cent.

Among the biggest losers was budget airline Ryanair on a day in which the sector as a whole struggled. The company said in the afternoon it would cut up to 25 per cent of its flights over a three-week period after coronavirus hit bookings. On its Dublin listing, Ryanair dropped 4.94 per cent to €11.65.

The spread of the coronavirus was responsible for other big losers on the day including the banks. AIB dipped 4.98 per cent to €2 while Bank of Ireland declined 2.26 per cent to €3.28. Traders suggested investors were wary of possible European Central Bank interventions in the form of an interest rate reduction, something which would trouble Irish banks.

Reports that finance ministers alongside their respective Central Bank governors were to speak on Monday was likely the catalyst for a rise in construction related stocks. CRH rose 2.1 per cent to €31.11 while Kingspan climbed 2.54 per cent to €58.50.

The blue-chip FTSE 100 closed up 1.1 per cent, after falling to its lowest level since 2016 on Friday, while the mid-cap index ended a volatile day of trading 0.2 per cent lower.

London’s main index was pushed higher by supermarket companies Ocado, Sainsbury’s and Morrisons after Ocado advised customers to place orders further in advance because of “exceptionally high demand”, indicating a possible reaction from shoppers to the spreading coronavirus outbreak.

The bluechip index was also boosted by oil majors BP and Royal Dutch Shell as hopes of a supply cut boosted oil prices. Miners and luxury goods makers rose 2.4-3 per cent, after being hit last week in a worldwide sell-off that erased more than $5 trillion from equity markets.

Aer Lingus-owner IAG was among the biggest losers, falling 8.2 per cent.

In news-driven moves, mid-cap company Senior, a supplier to Boeing, jumped 4.9 per cent after saying it was taking firm action to restructure its business and ensure a return to growth in 2021.

Insurer Hiscox rose 4 per cent after it said it had received small claims related to the outbreak as a pandemic is covered in only a very small part of its portfolio.

The pan-European STOXX 600 index closed 0.1 per cent higher after a 12 per cent slump last week, their worst weekly showing since the 2008 financial crisis.

Battered Milan stocks kept sliding, despite reports the government will introduce measures worth €3.6 billion, or 0.2 per cent of gross domestic product (GDP), this week to soften the blow.

Travel and leisure stocks continued to decline, falling 2.7 per cent

Satellite operator SES slumped 30 per cent after it cut its 2020 core profit and revenue forecasts, projecting a slowdown in its video and networks divisions.

Apple jumped 6 per cent, recovering from a more than two-month low after Oppenheimer & Co upgraded the stock to “outperform”, while also advising investors to buy into weakness in the stock. The so-called FAANG stocks, barring Facebook, also rose 1 per cent.

China’s JD.com rose 11.5 per cent after it forecast at least a 10 per cent rise in revenue for the first quarter, after posting better-than-expected quarterly results. – Additional reporting: Reuters