European Stoxx 600 finishes 0.16% ahead on the day but ends week in the red 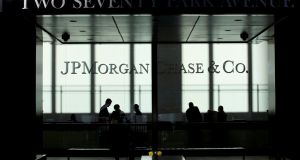 European shares closed higher on Friday, with banking stocks enjoying a boost from strong results from US peer JP Morgan, with signs of stabilisation in China’s economy underpinned by the wider market.

The pan-European Stoxx 600 index finished up 0.16 per cent, but ended the week in the red, after two weeks of gains.

The Iseq index increased by 0.9 per cent to 6,335.71. Bank of Ireland jumped 4.8 per cent to €5.84 while AIB added 3 per cent to €4.25, as followers of the sector cheered Wall Street giant JP Morgan’s release of better-than-expected revenue and profits.

Cairn Homes added 2.8 per cent to €1.33, recovering some of the ground lost earlier in the week after the group’s founders sold 17 million shares on the market.

CRH was also in focus, edging 0.2 per cent higher to €29.13, on reports that the group had hired Bank of America to sell its European distribution business. The group had signalled last year that the unit might be sold.

The FTSE 100 finished up 0.3 per cent, with mining stocks Rio Tinto and Glencore adding between 1.2 per cent and 3 per cent, respectively, as copper prices rebounded.

However, Plus500 slumped more than 31 per cent on its worst day in almost four years after its quarterly revenue plummeted to below a fifth of a year earlier. It took a hit from less market volatility creating fewer trading opportunities and new rules affecting retail clients.

Its peer CMC Markets gave up 4.3 per cent.

Games Workshop Group jumped 12.1 per cent on its best day since June 2017 after it guided to higher annual pretax profit.

Pets At Home tumbled 14.2 per cent, its biggest one-day loss ever, after Canada Pension Plan Investment Board agreed to sell its holding in the company, almost 11 per cent of the shares.

Banks got a boost after shares from JP Morgan’s results. Standard Chartered, Deutsche Bank, BNP Paribas and Credit Suisse rallied, taking the European bank index up 1.9 per cent to a five-month high.

The auto sector followed suit with car-makers such BMW, Daimler and Fiat Chrysler gaining more than 2.2 per cent each.

Amid warnings that proposed US automotive tariffs could do more damage to global growth than the ongoing US-China trade dispute, Bank of America analysts pointed to a lack of action out of the US on threatened auto tariffs.

“In our view, the reluctance to move forward is because actually imposing auto tariffs would be both deeply unpopular and a major shock to the equity markets,” they said.

Airbus gained as its new chief executive, Guillaume Faury, imposed a simplified management structure and a manifesto for factory modernisation.

Walt Disney’s shares had jumped as much as 12.3 per cent by mid-afternoon trading to hit a record of $130.90 after the company priced its streaming service in a bid to challenge the digital dominance of Netflix. Netflix’s stock fell.

JP Morgan also marched ahead as investors cheered the group’s results. However, shares in Wells Fargo fell after the lender cut its forecast for 2019 net interest income.

The Dow Jones Industrial Average was up 0.7 per cent, while the S&P 500 gained 0.4 per cent and the Nasdaq Composite added 0.2 per cent.