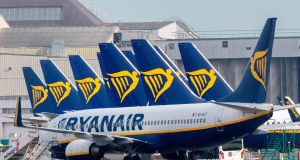 The index was dragged down by a fall of about 2.2% for Ryanair, with the carrier closing at €11.80 on another weak day for airlines across Europe. File photograph: Getty

European stocks climbed as analysts speculated the market could be relatively resilient to last week’s technology-led declines in the US, while sterling sank on concerns that Westminster is inching closer to a no-deal Brexit.

The pound fell to $1.3173, extending its drop to the longest since June as the prospects of a trade accord between the UK and the European Union looked increasingly remote.

Wall Street was closed for the Labor Day holiday. Investors will return on Tuesday after the break to weigh up sentiment to the tech shares that buckled at the end of last week after posting stratospheric gains throughout the pandemic.

The downturn has embroiled Japanese conglomerate SoftBank, which slumped 7 per cent on reports that it made massive bets on tech-linked options trades.

The Iseq started the week by nudging up 0.3 per cent, though this marked an underperformance compared to other European markets on a day when Ireland officially went into recession and no-deal Brexit concerns persisted. Trading volumes were light.

The index was dragged down by a fall of about 2.2 per cent for Ryanair, with the airline closing at €11.80 on another weak day for airlines across Europe. AIB declined 1.3 per cent to just under €1.09, while Permanent TSB dropped 5.3 per cent to 44 cent and food group Glanbia fell 0.6 per cent to €9.46.

There were better fortunes for building materials giant CRH, the largest stock on the Dublin market, with the cement maker’s shares rising 1.5 per cent to €31.00.

It was also a relatively good day for insulation-maker Kingspan, which finished at €67.85 on the Dublin market, up 0.75 per cent.

Both the exporter-heavy FTSE 100, which tends to rise when sterling weakens, and the more domestically focused FTSE 250 made gains, with the blue-chip index up 2.4 per cent and the mid-caps adding almost 1.7 per cent.

Retailers Marks & Spencer and Next also made gains of 1.4 per cent and 1.6 per cent respectively.

Healthcare, financial and consumer goods firms with a large international footprint were also among the boosts to the FTSE 100, with AstraZeneca, Reckitt Benckiser, Unilever, GlaxoSmithKline and Guinness owner Diageo all posting gains during the session, lifted by the decline in sterling.

Aer Lingus owner International Consolidated Airlines Group (IAG) was one of only three FTSE 100 companies to end in the red.

The European Stoxx 600 index added 1.7 per cent, with German stocks climbing 2 per cent and the French Cac 40 putting on 1.8 per cent. Spanish and Italian stocks rose 1.3 per cent and 1.8 per cent respectively on the upbeat if quiet start to the week.

In Paris, oil giant Total was among the risers, adding 1.85 per cent, while carmaker Renault rose 2.9 per cent. In Frankfurt, Volkswagen soared 5.4 per cent, while pharmaceutical giant Bayer rose 2.3 per cent. In keeping with the more subdued performance for airlines, Deutsche Lufthansa fell 1 per cent.

Investors are now awaiting a policy decision from the European Central Bank on Thursday, with the central bank expected to hold rates but indicate that downside risks have intensified, suggesting further easing is possible before year-end. – Additional reporting: Bloomberg / Reuters