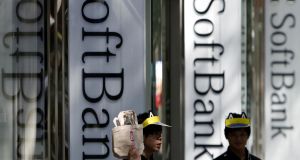 SoftBank’s high-risk strategy has been built up over the past few months. Photograph: Yuya Shino/File Photo/Reuters

Shareholders in SoftBank wiped nearly $9 billion (€7.6 billion) off its market value on Monday after weekend revelations that the Japanese conglomerate was the mystery “whale” that had driven US technology stocks to record highs.

The Financial Times reported on Sunday that the group’s trading strategy meant it was now sitting on gains of about $4 billion after founder Masayoshi Son drove aggressive bets on equity derivatives.

Traders in Tokyo said the report had helped crystallise the perception among some investors that SoftBank’s behaviour as a company increasingly resembled that of a hedge fund, populated with former investment bankers with a massive appetite for risk.

SoftBank shares lost 7.2 per cent on Monday – a fall that erased 946 billion yen (€7.5 billion) from the company’s market capitalisation. The benchmark Nikkei 225, in which SoftBank is the second biggest component, according to Bloomberg data, dropped 0.5 per cent.

Before the fall on Monday, SoftBank’s stock had climbed 33 per cent this year. The slide followed two days of declines on the Nasdaq at the end of last week.

It also came on the heels of warnings from Yunosuke Ikeda, Nomura’s Japan equity strategist, that the early part of September could usher in a broader sell-off of tech stocks in Tokyo as institutional investors return from holiday and unload stocks left overvalued by summer options purchases by individuals.

“For institutional investors who understand how options trades work, many don’t anticipate a major impact on SoftBank’s earnings,” said Naoki Fujiwara, a fund manager at Tokyo-based Shinkin Asset Management. But he said retail investors “are worried the derivatives trades will lead to major losses again”.

SoftBank’s high-risk strategy has been built up over the past few months, according to people with direct knowledge of the matter, during which time the group spent about $4 billion on options premiums focused on individual US tech stocks.

In total it has taken on notional exposure of about $30 billion using call options – bets on rising stock prices that provide the right to buy stocks at a preset price on future dates. Some of this position has been offset by other contracts bought as hedges.

While SoftBank’s huge derivatives bet on selected US stocks has worked for now, leaving the Japanese group with large, albeit as yet unrealised, profits, a continued pullback in equity markets could erode returns.

Meanwhile, analysts in SoftBank’s home market warned of the heightened sensitivity in certain parts of the Tokyo Stock Exchange to a broader rout of US technology stocks.

Over the summer Japanese retail investors piled into tech and game stocks, pushing the smaller-cap Mothers market to a two-year high. Analysts say many of those names could now be vulnerable. – Copyright The Financial Times Limited 2020