US shares slide 3.5% as tech stocks go into sharp reverse

Apple, Tesla and Zoom among the names selling off heavily 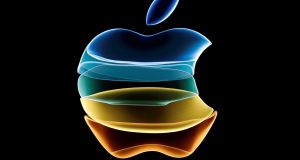 Technology stocks that have powered US equities to record highs this summer went into sharp reverse on Thursday, sending the Nasdaq Composite index tumbling almost 5 per cent in its biggest fall since June.

Apple’s shares lost 8 per cent – wiping more than $150 billion (€127 billion) from the iPhone maker’s value – while Amazon, Alphabet and Microsoft all fell more than 4 per cent. Several of the coronavirus era’s superstar stocks, such as Tesla and Zoom Video Communications, suffered even steeper drops.

The pullback offered a reminder that the US equity market’s 55 per cent rally since the depths of the crisis in March is still vulnerable to short-term shocks.

The five biggest US companies – Apple, Amazon, Microsoft, Alphabet and Facebook – have a combined value of almost $8 trillion, but were trading at an average of 44 times their expected earnings, close to the 50 times price-to-earnings ratio the five biggest stocks boasted at the dotcom bubble peak, according to Oxford Economics.

Although aggressive monetary and fiscal stimulus has helped engineer a dramatic recovery since March, some investors and analysts have been concerned that a correction was overdue, especially considering the economic scars of coronavirus, worries over a second wave of infections later this year and a potentially disruptive US presidential election in early November.

“We are not out of the woods, in fact quite the contrary,” said Savita Subramanian, an equity analyst at Bank of America. “Speed bumps” still lie ahead, she warned.

Technology stocks benefited from rampant investor demand in recent months but have divided opinion on the sustainability of the rally. Bumper bets in derivatives markets have raised expectations of large price swings to come, and prompted what some traders have identified as a feedback loop in which bullish options bets prompt further increases in stock prices.

“It’s an ugly day,” said Alicia Levine, chief market strategist for BNY Mellon Investment Management. “This is a healthy skimming off the top – it doesn’t feel very good if you’re over-levered to tech but this is a healthy correction.”

The S&P 500 fell 3.5 per cent, snapping a winning streak that had brought gains in 11 out of the 13 previous sessions. The Nasdaq Composite dropped 5 per cent and the more industry-heavy Dow Jones Industrial Average declined almost 3 per cent.

The Vix index, a measure of the S&P 500’s expected volatility based on options that is sometimes called Wall Street’s “fear gauge”, on Thursday jumped above the 30-point mark for the first time since mid-July. The equivalent volatility index for the Nasdaq shot up to more than 40 points – nearly double its mid-August low.

The declines have punctured a powerful stock market run that received further fuel last week when US Federal Reserve chair Jay Powell indicated the central bank would allow inflation to run beyond its usual target range before it taps the brakes with interest-rate rises. That solidified the view that borrowing costs will remain subdued for years to come, and increased the lustre of equities despite stretched valuations. – Copyright The Financial Times Limited 2020