Stocks have rallied 6.7% since July in sharpest advance in more than three decades 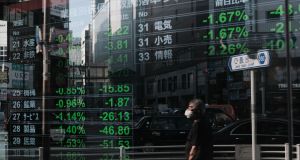 Stock indices from New York to Tokyo have pushed higher over the past month in the biggest August market bonanza in decades.

A sagging US dollar has combined with sparks of monetary and fiscal stimulus to help ignite a global equities rally during a month when traders would usually prefer focusing on the beach instead of their data terminals. Early indications that major global economies are on a recovery track have also helped to ease investor jitters that dominated this spring.

MSCI’s World measure of stocks in developed nations has jumped 6.7 per cent in August, which if sustained, would be the sharpest rally for that month since 1986. The average move either up or down for the gauge over the past 44 years in August is half that magnitude at 3.3 per cent.

The broader All-World index that also includes emerging markets has risen 6.2 per cent in the best run on records stretching back to 1988.

The gains in August have been regionally diverse. Wall Street’s S&P 500 is up 7.2 per cent, having earlier this month wiped out its pandemic losses and struck an all-time peak. Markers tracking stocks in Germany, France, Italy and Spain have risen 4 to 7 per cent on a euro basis.

Measures from the Federal Reserve, European Central Bank and Bank of Japan have helped to steady the world economy and financial markets that appeared to be at risk of total collapse during February and March. The manoeuvres have sharply pressured bond yields across the world and also helped to push up inflation expectations, especially in the US.

The combination has made high grade bonds look less appealing since they now offer very low or even negative returns, pushing investors towards riskier assets like stocks and lower rated debt.

A quarterly corporate earnings season that was not quite as bleak as some analysts had feared, added to the more optimistic outlook.

Still, some market participants remain wary over whether the recent gains can carry on into the Autumn.

Mr Panigirtzoglou said the first will come in mid-September when Federal Reserve policymakers meet following last week’s Jackson Hole economic symposium. Market participants will be waiting to see whether the central bank will lay out “more action or stimulus” after Jay Powell unveiled the Fed’s new approach to inflation that will allow for overshoots.

The second test, Mr Panigirtzoglou said, will come in November with the US election. All eyes will be on the margin of victory for Joe Biden or Donald Trump.

“A very close result is likely to be contested resulting in political gridlock and a lack of policy action, potentially for months after the election,” he said.

“The fact the odds of the two candidates are narrowing again towards 50-50 suggests that the probability of such gridlock is rising, which by itself raises the probability that some investors will take some risk off the table ahead of the. . . election.”

On Monday markets were bolstered by data showing further improvement in China’s services sector, while Japanese equities recovered from declines last week. Europe’s Stoxx 600 rose 0.6 per cent and US S&P 500 futures were up 0.33 per cent. UK markets were shut for a public holiday.

Japanese stocks rebounded, with the Topix up 0.8 per cent, on local media reports suggesting that Yoshihide Suga, an ally of Mr Abe supportive of his monetary and fiscal stimulus measures, would throw his hat in the ring to succeed the prime minister. Equities were also boosted by Warren Buffett’s Berkshire Hathaway unveiling a $6 billion (€5 billion) bet on Japanese trading houses.

Meanwhile, China’s official purchasing managers’ index for the manufacturing sector came in roughly in line with expectations at 51 in August, slightly below the previous month’s reading. Non-manufacturing PMI stood at 55.2 in August, up sharply from 54.2 in July. – Copyright The Financial Times Limited 2020