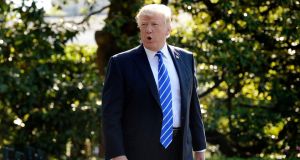 The dollar has been pressured by uproar over US president Donald Trump’s firing of FBI director James Comey. Photograph: Getty Images

The dollar steadied close to six-month lows against a basket of currencies on Monday, as investors took stock of a week of political turmoil in the United States and a resurgent euro zone economy.

The greenback has been pressured by uproar over US president Donald Trump’s firing of FBI director James Comey, while improving economic prospects for Europe have also seen investors buy into the euro, further weighing on the dollar.

Mr Trump’s departure on a trip to the Middle East seemed to have cooled the temperature briefly on political drama in Washington that some fear could derail his administration’s promises of tax reform and fiscal stimulus, if not his presidency.

The dollar index, which tracks the greenback against a basket of six major rivals, inched 0.2 per cent higher to 97.366 . But it was not far from the previous session’s low of 97.080, its lowest level since November.

“We’re generally being kind of pushed back against the diminishing rate hike expectations, but things are quite quiet this morning and for the rest of the week ahead too.”

St Louis Fed President James Bullard said on Friday that the US central bank’s expected plans for rate increases may be too fast for an economy that has shown recent signs of weakness.

Several Federal Reserve policymakers are due to speak this week, and the central bank on Wednesday will publish minutes of its May meeting, which preceded the most recent political developments.

Futures traders are pricing in about a 3 in 4 chance of a June rate hike, but only about a 40 per cent chance of two or more rate hikes in 2017, according to the CME Group’s FedWatch Tool.

“We’re still keeping our expectation of a June hike, but the impact of expectations of higher rates on forex could be limited because of the political moves,” said Harumi Taguchi, principal economist at IHS Markit in Tokyo.

“And in the meantime, Europe is emerging as a bright spot in the global economy,” she said.

Net long positioning on the euro rose to its highest in more than three years in the week ended May 16th, according to calculations by Reuters and Commodity Futures Trading Commission data released on Friday.

Recent economic improvements in the euro zone have raised market expectations the European Central Bank will tone down its dovish language at its next Governing Council meeting next month.