Woes over Comey sacking and Russia links, plus weaker US data, put pressure on dollar 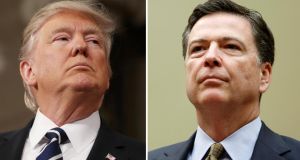 The dollar was on track to record its worst week since August on Friday, having lost almost all the gains made since Donald Trump, now surrounded by political worries, was elected American president last year.

The dollar index, which measures the currency against a basket of six major rivals, has fallen about 1.6 per cent this week, hitting its lowest since November 9th – the day of the US election results – on Wednesday and edging back 0.3 per cent down close to that trough on Friday.

Political uproar over – among other things – Trump’s firing of former FBI director James Comey, allegations he pressed Comey to stop investigating his former national security chief and his campaign’s alleged ties with Russia have pressured the dollar.

Analysts said the reason the dollar was under pressure was not just because of uncertainty over Trump now serving a full term; it was also because the controversies meant the policies Trump had promised – in particular on fiscal stimulus – that had given markets a “Trump bump” were less likely to be pushed through any time soon.

“The market is fearful now that the cuts in regulation, the tax incentives, etc, just won’t be forthcoming because the administration will be so busy fire-fighting scandals, it won’t be able to push through any of its promises,” said Rabobank currency strategist Jane Foley, in London.

Foley added that worries over Trump had also coincided with a run of weaker American data that has seen a slight pull-back of expectations that the Federal Reserve will hike interest rates next month, which had also pressured the dollar.

The euro, which makes up more than half of the dollar index, has benefited from the dollar’s strength but has also had its own upward drivers, with political risk having eased and with talk about the European Central Bank winding back its expansive monetary stimulus programme as the euro zone economy recovers.

The single currency hit a six-month high on Thursday and was close to that peak on Friday at $1.1139, up a third of 1 per cent on the day.

The dollar had gained some reprieve on Thursday, helped by solid US economic data, including a jump in the Philadelphia Fed’s gauge of mid-Atlantic manufacturing activity in May.

But focus was likely to remain on the Trump administration’s troubles and that could continue to weigh on the dollar, analysts said.

“I think we will get a lot more . . . headlines in coming weeks and months, especially as the investigations take place,” said Tan Teck Leng, foreign-exchange analyst for UBS Wealth Management in Singapore. “It will hit sentiment for the dollar.”

Against the safe-haven yen, the dollar was flat at 111.46 but was on track for its first week of falls in five, with risk appetite having fallen across markets this week.

1 Who are Ireland’s 17 billionaires?
2 Are there annual limits on inheritances or gifts to a child?
3 Fallon & Byrne gets permission for extension in Exchequer Street
4 My father in a nursing home wants to gift me his house
5 UK to prioritise EU trade deal over one with United States
6 Fianna Fáil may have just pressed the pause button on the property market
7 O’Flynn ‘very unhappy’ with extra payments to former employee, court hears
8 Davos Diary: UCD prof goes batty, Ivanka hits town and Prince Charles takes the stage
9 Eason puts Blanchardstown store on market at €16m
10 Tipperary land holding of 800 acres seeking €11m
Real news has value SUBSCRIBE