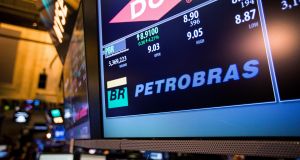 Irish shares rose on Friday, with 99.8 per cent State-owned AIB soaring to levels not seen since July last year as investors ignored normal market valuation measures ahead of the bank’s long-awaited return to the main stock market in Dublin.

The bank’s shares, which are tradable on the junior market in Dublin, rose by 4.4 per cent to €7.20, leaving that at 1.5 times the net value the bank itself put on its assets – or what is known as book value. By comparison, Bank of Ireland’s shares are trading at 0.84 times of book value, while the wider European banking sector is trading at less than 1.2 times.

Traders and analysts said that AIB’s shares will be priced at a deep discount to their current market price when the Government decides to press the button on a 25 per cent stake sale as soon as the coming weeks.

Meanwhile, the Iseq index gained 0.9 per cent to 6,930.76, following three sessions of losses, while the pan-European Stoxx 600 index advanced by 0.6 per cent.

Aryzta stood out as a strong spot, rising 4.1 per cent to €32.13, as investors welcomed the announcement late on Thursday that Kevin Toland, currently chief executive of airport operator DAA, will take over the beleaguered baked goods maker later this year.

FBD gained 2.9 per cent to €8.40 as the insurer revealed that its all-important solvency ratio at the end of last year was at the upper end of an internal target set by the company.

Glanbia added 1.5 per cent as members of Glanbia Co-op, which owns 36.5 per cent of the listed food group, voted in favour of taking control of its Dairy Ireland business.

“At the time the deal was announced [in February], Glanbia’s share price ticked up 12.3 per cent in anticipation that the lower margin, slower growth Dairy Ireland division would be spun out,” said Investec analysts in a note on Friday. The deal still needs approval from Glanbia’s shareholders.

The FTSE 100 was up nearly 0.5 per cent on the day, bringing it into positive territory for the week after its performance was dented by worries over turmoil in US president Donald Trump’s administration that sent stocks tumbling across the globe.

Investors looked through the political uncertainty to a better earnings season and improved UK retail sales data which pointed to a brighter outlook for consumer-facing stocks.

Miners Rio Tinto and Anglo American underpinned gains on the index, up 2.1 to 2.4 per cent.

BMW gained 1.2 per cent and Volkswagen pressed 0.7 per cent higher in Frankfurt, while Peugeot shares rose 0.2 per cent in Paris.

Dufry rallied 4.9 per cent after a regulatory filing showed Richemont acquired a 5 per cent stake in the travel retailer.

The US dollar fell and was poised for its worst week in more than a year while world stock markets edged up by early afternoon Friday amid some calm following declines earlier in the week spurred by uncertainty relating to Donald Trump’s US presidency.

The US dollar slipped 0.7 per cent on Friday against other major currencies and was down about 2 per cent for the week, its worst week since April 2016.

Strong quarterly earnings from companies, including Autodesk and Deere, boosted the market. Autodesk was among the biggest percentage gainers on the S&P and the Nasdaq after the software maker reported better-than-expected quarterly revenue.

Deere hit an all-time high of $122.24 after the farm and construction equipment maker reported a quarterly profit that beat expectations.