Trump continues to have see-saw effect on markets 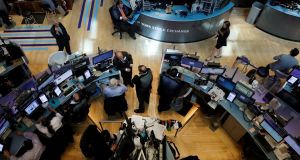 Traders work on the floor of the New York Stock Exchange. Wall Street rebounded after the Philadelphia Federal Reserve said its business activity index unexpectedly rose in May after declining for two months. Photograph: Brendan McDermid/Reuters

European stocks posted their biggest back-to-back drop since January as investors continued to retreat amid the turmoil surrounding US president Donald Trump.

Yet US stocks rebounded from the worst sell-off of the year and the dollar strengthened as data reinforced optimism in the US economy, even as political events continued to roil Washington.

Bank of Ireland and Aryzta, which both announced new chief executives in the last two days, fell significantly on the Iseq, which closed at 6,868.25, down 26.5.

BOI fell 2.9 per cent, as investors digested the news that HSBC banker Francesca McDonagh had been appointed to replace Richie Boucher.

At Swiss-Irish foods group Aryzta, the stock was hammered earlier in the day as speculation swirled about its CEO announcement. By the end of the session, it finished own 2.5 per cent. After markets closed, it announced that Dublin Airport Authority chief Kevin Toland will take over as CEO, replacing Owen Killian.

Hotel group Dalata fell more than 0.5 per cent after announcing it was spending €70 million on three freehold deals.

Travel software group Datalex rose 1.3 per cent ahead of a trading update next Tuesday, at which it is expected to reiterate guidance of earnings growth of up to 20 per cent.

British blue chips suffered their worst day since the end of April on Thursday, but came off lows as pressure triggered by uncertainty over Mr Trump’s stimulus agenda eased.

The mostly foreign-earning FTSE 100 index ended down 0.9 per cent, underperforming the broader European market as the pound strengthened.

Hargreaves Lansdown rose 0.6 per cent after a largely positive trading update saw assets jump 10 per cent with increased market gains and inflows as more retail investors stashed savings into the new Lifetime ISA amid a global surge in equity markets.

Luxury trenchcoat-maker Burberry was a bright spot on the blue-chips, up 4.7 per cent after its full-year results showing strong free cash flow rekindled investors’ hopes for the stock. Profits were down 21 per cent when the currency impact is stripped out, hit by weaker demand in the US. But analysts saw a better-than-expected cash flow, higher dividend and new share buy-back as positive signs for the company.

The Stoxx Europe 600 Index dropped 0.5 per cent at the close, pushing the two-day decline to 1.7 per cent. Across Europe, the French Cac 40 and German Dax fell by 0.5 per cent and 0.3 per cent, respectively.

All but four European industry groups declined, with beverage and real estate stocks retreating the most.

Spanish lender Banco Popular should not expect to receive an injection of public funds, the country’s economy minister said on Thursday, increasing pressure on the bank to find a merger partner quickly. Its stock fell more than 2 per cent.

Wall Street rebounded after the Philadelphia Federal Reserve said its business activity index unexpectedly rose in May after declining for two months. Weekly unemployment data also pointed to strength in the labour market.

The S&P 500 financials and technology sectors, which were the worst hit on Wednesday, rebounded to give the biggest boost to the broader index.

Apple was up 1.5 per cent after registering its steepest decline in over a year. Cisco tumbled 7.7 per cent after the networking gear maker forecast current-quarter revenue that came in below analysts’ estimates.

1 Who are Ireland’s 17 billionaires?
2 My father in a nursing home wants to gift me his house
3 Nama lends Cosgraves €15m to fund huge apartment development
4 Long-hyped smart fridges will never run out of milk or data
5 Are there annual limits on inheritances or gifts to a child?
6 Property firm sues engineering company over waterproofing of basement
7 Health insurance: Switch often for your financial wellbeing
8 Builders completed 21,500 homes in State during 2019
9 Irish whiskey sales slow in US but distillery visitors top 1m locally
10 Cubic Telecom raises more than €11 million in funding
Real news has value SUBSCRIBE