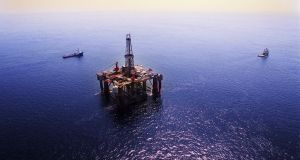 The licence extension pertains to operations in the southern Porcupine Basis and is operated by Eni Ireland. Photograph: Bryan O’Brien

Providence Resources, an oil and gas exploration company, has obtained consent for the extension of a licence for operations roughly 170km off the southwest coast of Ireland.

The operation lies in the southern Porcupine Basin and the licence is operated by Eni Ireland on behalf of its partners Repsol, Providence and Sosina exploration. Providence holds a 26.8 per cent interest in the project.

The consent, which was granted by the Minister of State for the Department of the Environment, Seán Kyne, extends the second phase of the exploration licence to November 2019.

This means that the third and fourth phases are also extended to November 2021 and 2025 respectively.

“We are pleased to have received this confirmation from the Government on the licence extension as we continue to move forward with the evaluation of this licence”, said Tony O’Reilly, chief executive of Providence.