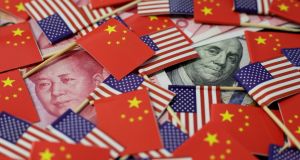 China took steps to limit weakness in the yuan, providing some stability to global financial markets in the wake of Monday’s rout, and said it won’t depreciate the currency to be competitive.

The People’s Bank of China on Tuesday set the daily currency fixing stronger than analysts expected and announced the planned sale of yuan-denominated bonds in Hong Kong. The moves, which came after the US labelled the country a currency manipulator, helped drive the yuan up 0.2 per cent a day after it sank the most since 2015. The central bank also rejected the accusation it manipulates the yuan.

“China wants the currency to have two-way flexibility, but it doesn’t want the market to be too panicked,” said Larry Hu, head of China economics at Macquarie Securities in Hong Kong. The PBOC will let the fixing be more market-based unless it needs to restore confidence in the currency, he said.

China on Monday allowed the yuan to fall past 7, a key level defended by the authorities in the past, and pinned the blame on US protectionism. While a weaker currency would help offset the impact of higher tariffs on Chinese goods, an uncontrolled decline could cause instability in its markets as well as spur capital flight – something officials have sought to avoid in recent years.

SandP 500 Index futures rose 0.6 per cent, after falling almost 2 per cent earlier Tuesday after the Treasury Department formally labeled China a currency manipulator, while the MSCI Asia Pacific Index trimmed declines by more than half to 0.8 per cent. The yen slid 0.6 per cent. Treasuries erased gains after 10-year yields hit the lowest since October 2016.

“The PBOC is sending signals that it would like to mitigate yuan depreciation,” said Frances Cheung, head of Asia macro strategy at Westpac Banking Corp. in Singapore. “The offshore yuan had faced resistance around 7.1 intraday a few times. I expect it to hover around this level near term.”

Analysts took an ax to their yuan forecasts after Monday’s plunge. Strategists at Bank of America lowered their year-end forecast to 7.3 per dollar from 6.63, based on their expectation that China wants a weaker currency to soften the impact of higher tariffs. Citigroup Inc. said the yuan may tumble to 7.5 if tensions escalate.

The US’s manipulator announcement followed a declaration by China’s central bank chief, Yi Gang, that his nation wouldn’t use the yuan as a tool to deal with trade disputes. “I am fully confident that the yuan will remain a strong currency in spite of recent fluctuations amid external uncertainties,” MR Yi said in a statement. President Donald Trump called the yuan’s plunge below the symbolic level of 7 per dollar “currency manipulation” in a tweet.

Under the designation, Treasury Secretary Steven Mnuchin “will engage with the International Monetary Fund to eliminate the unfair competitive advantage created by China’s latest actions,” the department said in a statement.

The PBOC said the recent yuan depreciation was decided by the market, not manipulated by China, according to a statement.

“The PBOC had the fixing stronger than 7 to correct herding behavior yesterday,” saiD Stephen Chiu, a strategist at Bloomberg Intelligence. “It’s a message to the US – we aren’t manipulating the currency weaker. If markets drive dollar-yuan rate even higher and out of hand, I don’t think the PBOC will sit there doing nothing.” – Bloomberg