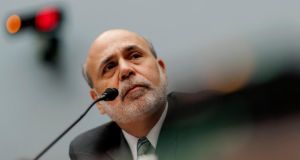 In his twice-yearly report to Congress on monetary policy, US Federal Reserve chairman Ben Bernanke said the Fed’s bond- buying programme would cease by mid-2014, but stressed the plan was not set in stone. Photograph: Pete Marovich/Bloomberg

US Federal Reserve chairman Ben Bernanke gave a modest boost to stock markets around the world yesterday, by reassuring that the US central bank’s monetary stimulus will only be cut if the economy is strong.

In his twice-yearly report to Congress on monetary policy, Bernanke said the Fed’s bond- buying programme would cease by mid-2014, but stressed the plan was not set in stone.

The comments offered the biggest boost to bank stocks, which have the most direct access to the extra central bank liquidity.

DUBLIN
The main mover on the Iseq was mining and exploration company Kenmare Resources, which surged late in the afternoon to close up by 6.96 per cent at €0.29.

Shares at oil and gas exploration company Providence Resources fell to €6.10 at one point in the afternoon, but recovered slightly to close at €6.20, down 3.82 per cent. Petroceltic also experienced losses, falling 2.07 per cent to €1.57, but Tullow Oil gained 1.59 per cent, closing at €12.80.

Paddy Power rose 0.6 per cent to €63.15, but the appointment of former deputy chief executive of Ryanair as an independent non-executive director at the company is expected to have a positive effect on share price.

LONDON
Thanks to gains in the miners and the banks – two of its three biggest sectors – the FTSE 100 closed up 0.2 per cent, nearing six-week highs and recovering from an early dip on Bank of England minutes, which showed policymakers unanimously voted against expanding the bank’s asset-buying programme.

Miners were cheered by a string of solid output numbers from the likes of BHP Billiton, up 2.2 per cent after quarterly iron-ore output jumped as its operations in Australia expanded.

The banking sector, boosted by Mr Bernanke’s comments as well as positive sentiment resulting from strong profits at Bank of America, provided the biggest increase to the FTSE 100 of some 6.8 points.

Thomas Cook closed up 2.7 per cent to 146.5 pence after UBS recommended that investors buy, saying 2013 had provided “an almost perfect environment for tour operators”.

Unilever, which makes Dove soap, dropped 1.6 per cent to 2,756 pence as Credit Suisse downgraded its rating on the stock.

Smiths Group, maker of security scanners, dropped 1 per cent to 1,377 pence. The company predicted that operating profit would fall short of its previous forecast by as much as £15 million for the full-year ending in July.

EUROPE
European stocks rebounded from their biggest drop in more than a week, in response to Mr Bernanke’s announcement that the recovery would determine when the central bank reduced its asset purchases.

ThyssenKrupp climbed 3.4 per cent after Credit Suisse Group said the company may be worth more if it spun off its businesses.

Commerzbank, Germany’s second-biggest lender, fell 1.4 per cent for the worst performance on the benchmark DAX.

US
In early US trading, nine of the 10 S&P 500 industry sectors moved higher, led by gains in commodities and health shares. St Jude Medical was one of the S&P 500’s best performers after its profit topped expectations, adding 6.9 per cent to $51.82.

1 How can I view my dead brother’s will if I’m not the executor?
2 Michel Barnier rejects UK’s call for Canada-style trade deal
3 Investors pile into property as turnover in build-to-rent sector reaches €2.54bn
4 Kerry’s Chinese sales set for 30% hit from coronavirus
5 UK Fraud Office examines £1.2m billion Sumitomo loss
6 UK shoppers face higher prices without post-Brexit trade deal , warns BRC
7 Applications for 961 new homes in Dublin and Meath rejected
8 ‘Short window’ to stop AI taking control of society, warns ex-Google employee
9 Bursting of Tesla bubble a case of ‘not if, but when’
10 Remarks by George Soros cause jitters as Year of the Monkey starts
Real news has value SUBSCRIBE