Pan-European Stoxx 600 was up 0.9 per cent, recovering for second straight day 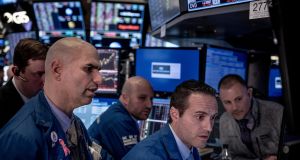 World stock markets climbed on Thursday as investors weighed a rebound in oil prices and prospects for further government stimulus against stark economic data showing the toll of the coronavirus pandemic. Investors tilted toward emerging markets from safe-haven assets like the dollar and government bonds. Major US and European stock indexes were up more than 1 per cent on news US jobless claims fell to 4.4 million, a decline from 5.2 million the week before, but still about 200,000 more than expected. A record 26 million Americans have sought unemployment benefits over the past five weeks. “The market is ignoring all the weak data so far, it’s priced in,” said Priya Misra, head of global rates strategy for TD Securities.

Dublin’s Iseq rose 0.6 per cent to 5,262, slightly underperforming its European peers. The State’s main banks had their best day in several weeks. Bank of Ireland, AIB and Permanent TSB were up 13.5 per cent, 8.2 per cent and 3.5 per cent respectively on foot of European Central Bank (ECB) moves to make it easier for banks to borrow.

Homebuilders Cairn and Glenveagh also enjoyed a bounce, increasing by 6 per cent and 5 per cent, amid further speculation that construction may be among the first sectors to reopen after the lockdown.

Ryanair shed more value, however, dropping 0.9 per cent to €9.42 as rival carrier Lufthansa inches closer to finalising a state aid rescue package worth up to €10 billion next week, reflecting the extent of damage caused to the airline industry from the crisis.

Hotel group Dalata, which has been badly hit by the shutdown, edged down again to €2.59 while Iseq heavyweight CRH fell 1 per cent to €25.85 albeit after a strong session on Wednesday linked to news it would stick to plans to pay a final dividend on last year’s earnings.

Britain’s FTSE 100 rebounded from early losses on Thursday, as surging oil prices and signs that major UK homebuilders were planning to resume work boosted sentiment, with investors shrugging off some shockingly weak economic data. After falling as much as 0.6 per cent in the morning session, the blue-chip FTSE 100 ended 1 per cent higher, boosted by oil majors Royal Dutch Shell and BP as crude prices recovered from a collapse earlier this week. Shares in Taylor Wimpey surged 9.4 per cent and smaller peer Vistry, formerly known as Bovis Homes, jumped 11.5 per cent after signalling plans to restart construction work in the next two weeks. Taylor Wimpey also said it continued to sell houses online during the lockdown and posted solid year-on-year growth in orders, sparking a rally in shares of fellow homebuilders Barratt Development and Persimmon. That added to hopes of a rebound in economic activity, with stock markets even looking past data showing a historic collapse in demand for UK businesses in April as the coronavirus pandemic forced a nationwide lockdown. The IHS Markit/CIPS Flash UK Composite Purchasing Managers’ Index (PMI) fell to a record low of 12.9 from 36.0 in March – miles below even the weakest forecast of 31.4 in a Reuters poll of economists.

A rally in energy and bank shares lifted European stock markets on Thursday, while investors counted on more stimulus to revive the bloc’s economy as the coronavirus-induced lockdowns brought activity to a halt in April. The pan-European Stoxx 600 was up 0.9 per cent, recovering for a second straight day as oil prices edged higher after collapsing at the start of the week. The energy index jumped 3 per cent, with Total SA, BP and Royal Dutch Shell providing the biggest boost to the Stoxx 600. Kicking off the first-quarter earnings season for the big European lenders, Credit Suisse’s net profit topped expectations, but the bank followed its American peers in bulking up for potential loan losses due to the pandemic. Sweden’s AB Volvo shed 5.6 per cent and was on course for its worst day in a week after warning of stalling truck orders and a challenging adjustment to a “new normal” of feebler demand.

Wall Street jumped 1 per cent on Thursday as a third straight decline in weekly jobless claims raised hopes the worst of the coronavirus pandemic’s impact on the labour market was over, while energy stocks zoomed 5 per cent on a rebound in oil prices.

Weekly jobless claims fell to 4.43 million from a revised 5.24 million, but it was still staggering and took the total in the past five weeks to a record 26 million, wiping out all the US jobs created since the global financial crisis. Blackstone Group jumped 6 per cent as the asset manager posted a 4 per cent rise in its first-quarter distributable earnings, driven by a surge in management fees.

A 10.3 per cent jump for Las Vegas Sands Corp lifted US casino operators after the company predicted a speedy recovery in Asia on pent-up gambling demand. Shares in Wynn Resorts, MGM Resorts and Melco Resorts gained 4-8 per cent. – Additional reporting by Reuters