US stocks tumble for second day amid dismal corporate earnings 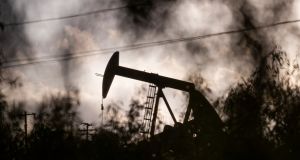 US crude oil prices went negative on April 20th, as demand disappears due to lockdown measures in place due to the coronavirus pandemic. Photograph: Etienne Laurent/EPA

A fresh bout of risk aversion gripped financial markets as US stocks tumbled for a second day, oil resumed a historic plunge and Treasuries rallied.

The SandP 500 fell as much as 2 per cent, with equity investors shrugging off signs that Congress is close to a fresh spending bill to combat the impact of the pandemic.

The historic rout in crude rattled markets anew, with the June contract plunging as much as 42 per cent after May contracts expiring Tuesday sank below zero for the first time in history. The 10-year Treasury yield dropped below 0.55 per cent.

The gut-wrenching oil rout may signal the hit to the global economy will be far worse than anticipated by investors who sent the SandP 500 up 28 per cent from its March lows. While major economies around the world take tentative steps toward reopening, signs the US is close to bolstering spending did little to offset fresh concerns over the depth of the recession.

Corporate earnings add to woes. Deep profit declines often come with no company insight into the remainder of the year and mounting signs that capital investment is set to plunge. Netflix, Texas Instruments and Chipotle are among companies reporting after the close Tuesday.

“A lot of this is being driven by the profound and historic collapse in crude prices. That’s largely been the catalyst that’s roiled already fragile market sentiment.”

Elsewhere, MSCI’s All Country World Index, which tracks stocks across 49 countries, was down 0.9 per cent. European stock markets followed their Asian counterparts lower, with the pan-European Stoxx 600 index down over 2 per cent by midday in London.

Monday’s plunge in oil, which saw some prices reach minus $40 a barrel, resulted from growing crude stockpiles and dwindling storage space as lockdowns to contain the spread of the novel coronavirus slashed global fuel use.

First-month West Texas Intermediate continued to trade in negative territory on Tuesday, at -$7.13 a barrel.

“I have always thought of oil a little bit like a currency; it stores value, is controlled by world leaders and makes the world go round,” said Gregory Perdon, co-chief investment officer at Arbuthnot Latham.

“But yesterday was a wake-up call and investors would be remiss to ignore that low oil means lower inflation, higher defaults, lower growth and more political instability as less petrodollars circulate in the system.”

Signs the pandemic is taking a toll on the global economy continued to roll in.

Australia’s central bank now forecasts the country’s economy will shrink 10 per cent in the first half of 2020. South Korea is set for its biggest first-quarter contraction since 2008, with the latest data showing exports plunged by almost a third in the first 20 days of April.

There was a glimmer of hope in Europe: the mood among German investors improved in April as concern about the impact of the coronavirus pandemic on Europe’s largest economy seemed to ease, a survey from the ZEW research institute showed.

The euro edged lower against the dollar, and Southern European bond yields traded near recent highs before a European Union summit later this week on how the EU will try to revive an economy hit by the pandemic.

Monday’s plunge in US crude came as the May contract expiry looms at the end of Tuesday’s trade.

International benchmark Brent crude, more readily seaborne than its US counterpart, fell 15.7 per cent to $21.69 per barrel.

That is still some 60 per cent below January’s peak, highlighting the disruption to energy consumption and the long road back to global growth that underpins oil demand.

“This level of oil price is not sustainable for any global oil producer. Even for Saudi Arabia, which has a low cost of production, this is not viable,” said Jai Malhi, global market strategist at JP Morgan Asset Management.

“Such low prices will not last and the pressure on storage will likely force OPEC+ into further production cuts in order to boost prices.”

The yield on benchmark 10-year US Treasuries, which falls when prices rise, dropped under 0.6 per cent to 0.5769 per cent..

1 Race against time: The inside story of Ireland’s Covid Tracker app
2 Blockbuster Schrems decision to impact nearly every business
3 Judge strikes out Clontarf residents case against development
4 EU court rejects data transfer arrangement with US
5 Ryanair and Aer Lingus cut flights as travel restrictions continue
6 Dublin City Council brings new challenge to Ronan dockland tower
7 State gets €8.8m EU grant to study Dart expansion into Kildare
8 The 7 key things the Government has to consider to jump start a recovery
9 Ireland wins appeal in €13 billion Apple tax case
10 ‘I set up an investment club many years ago with a bunch of friends’
Real news has value SUBSCRIBE