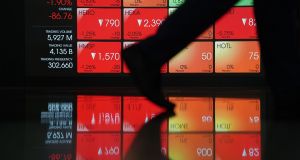 European stocks dropped with US futures on Thursday as investors weighed the latest signs of the coronavirus’s impact on the global economy and a slew of corporate earnings. Crude oil rose to about $15 a barrel in New York.

The Stoxx Europe 600 Index quickly erased its opening gain as an estimate of private-sector activity in the euro area plunged far more than economists had anticipated. The index fell 0.3 per cent as of 9.06 am London time. Germany’s DAX Index decreased 0.7 per cent. The Irish index of share s rose slightly to 5,242.

Credit Suisse Group fluctuated after the bank said first-quarter profitability rose but that it’s taking more than $1 billion in writedowns and provisions for bad loans after the pandemic.

Contracts on the main US equity benchmarks turned lower as traders awaited the latest weekly American unemployment numbers due Thursday. Asian stocks saw modest gains. Crude futures advanced in the wake of President Donald Trump’s order to the Navy to destroy any Iranian gun boats that harass American ships at sea. The dollar held three days of gains versus its major counterparts.

Investors will be watching Thursday’s US jobless claims for the latest sign of the coronavirus’s impact, with the median expectation being for 4.5 million new applicants. While a gauge of global equities is up about 22 per cent from its March closing low, chaos in the oil market, poor European data and a mixed bag of corporate earnings suggest a more crippled global economy.

On the virus front, New York deaths were at the lowest rate since early April, while Treasury Secretary Steven Mnuchin said he anticipates most of the economy will restart by the end of August. House lawmakers on Thursday are set to pass another round of aid.– Bloomberg

Apple’s $250bn Irish dividend, Bank of Ireland’s U-turn, and the cost of divorce 06:30
Stocktake: A record-breaking cheating season 05:50
Transferring the family farm without a tax headache 05:50
Stocktake: Tech stocks have taken over the market 05:40
Divorce: What will it cost and can you afford it? 05:38

1 ‘No demand... because there are no people’ at well-known Dublin pub
2 Divorce: What will it cost and can you afford it?
3 Dublin-based AR tech company Antikytera secures investment
4 UK criticised for ‘unforced errors’ on post-Brexit trade deals
5 Apple’s $250bn Irish dividend, Bank of Ireland’s U-turn, and the cost of divorce
6 Nearly 30,000 could lose pandemic payment if they do not confirm eligibility
7 ‘Humble’ Airbnb going back to basics
8 Apple received $250bn dividend from Irish subsidiary in 2019
9 Transferring the family farm without a tax headache
10 Buying a second home now that we work from home
Real news has value SUBSCRIBE