Investors remain cautious about hopes of swift recovery from Covid-19 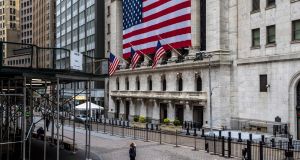 An oil price rebound and hopes of more economic stimulus lifted European shares on Wednesday, even as investors remained cautious about a swift recovery from the Covid-19 pandemic.

Oil prices rose on the prospect of pledges of extra output cuts, and optimism from the recovery spilled over into most other commodity markets.

The Iseq closed up 2.2 per cent, as index heavyweight CRH led gains. The cement-maker closed up 7 per cent at €26.11 after it said it would stick to plans to pay a final dividend on last year’s earnings and hoped to benefit from a post-coronavirus economic stimulus. On its London listing, it gained 6.7 per cent.

Britain’s FTSE 100 gained as a 6 per cent rally in energy majors BP and Royal Dutch Shell and positive corporate updates injected calm into equity markets after an oil-driven rout.

The commodity-heavy FTSE 100 outperformed its European peers, closing 2.3 per cent higher. The FTSE oil & gas index rose 5.5 per cent, while other cyclical sectors such miners, banks and insurers were all higher.

Online fashion retailer BooHoo surged 12.3 per cent after it said sales had recovered in recent weeks after taking a hit in March due to the coronavirus crisis. Bohoo’s shares have surged by about 130 per cent since mid-March lows, taking its market value to almost double that of Marks & Spencer.

Power producer Drax Group soared 16 per cent after reaffirming its 2020 core profit outlook and saying it expects to pay its 2019 dividend despite the hit from the pandemic.

Copper miner Antofagasta rose 6.3 per cent after it posted 4.6 per cent rise in March-quarter production.

The pan-European Stoxx 600 index finished up 1.8 per cent after tumbling more than 3 per cent on Tuesday following a historic collapse in oil prices. In Germany, the Dax rose 1.6 per cent, while in France the Cac 40 was up 1.25 per cent, with French energy giant Total surging 4.8 per cent.

Gucci-owner Kering slumped almost 5 per cent after saying sales were hit hard early in the coronavirus crisis due to the fashion group’s reliance on Chinese customers and that it was premature to say how quickly China sales would rebound.

Roche Holding rose 2.7 per cent as the Swiss drugmaker confirmed its 2020 sales and profit outlook amid rising demand for its new Covid-19 tests.

Fast-casual chain Chipotle Mexican Grill jumped 13 per cent after it reported soaring digital and home delivery sales and said it had enough cash and liquidity to get through the next year.

Netflix more than doubled its own projections for new customers in the first quarter. However, its shares fell 2.8 per cent as it forecast a weaker second half if the lockdown measures were to be lifted. – Additional reporting: Reuters