Why operators in the darkest part of Ireland’s €1.76bn shadow banking hub needn’t worry about the taxman 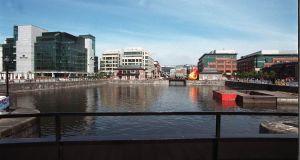 For the McCann fruit ‘n’ veg dynasty, it’s a case of back to the future.

Having sold Fyffes – which traces its roots back to 1902 when Charles McCann established a greengrocers on Clanbrassil Street in Dundalk – to Japan’s Sumitomo Corporation last year for €751 million, the founder’s descendents are getting back into the banana business.

Total Produce, the fresh produce group spun out of Fyffes in 2006 as a separately-listed company, announced on Thursday it is set to take a 45 per cent of Dole Foods, the world’s largest fresh fruit group – which generates 43 per cent of its sales from bananas.

The McCanns own 11.3 per cent of Total Produce, which has an option to acquire all of Dole two years after the initial deal goes through. The announcement came less than four weeks after Dole owner David Murdock’s talks to sell his company to Belgian food distributor Greenyard broke down and the nonagenarian pulled a back-up plan to float the company for a third time.

Still, the McCanns and Murdock have been orbiting each other for decades. Dole weighed buying Fyffes in 1993 and enjoyed looking on from the sidelines as Fyffes made an abortive bid in 2014 to take over rival Chiquita. (That plan was scuppered by the North Carolina group’s own shareholders, who backed a rival takeover bid from two Brazilian companies instead.)

Total Produce chairman Carl McCann estimates that the Dole deal will add to his group’s earnings within the first full year, with annual synergies and cost savings set to rise to $35 million (€28 million) over the medium term, from an initial $15 million to $20 million.

The family is recycling some of the €87.5 million made from the sale of its 11.8 per cent stake in Fyffes last year into the Dole transaction, subscribing for €27 million of the €145 million of stock issued on Thursday to part fund the deal.

According to our calculations, their Total Produce stake is set to increase from 11.3 per cent to 12.6 per cent as a result.

It makes one wonder how much longer Carl’s brother David will remain executive chairman of Fyffes, as Total Produce becomes a closer peer – and rival.

Operators in the darkest part of Ireland’s $2.2 trillion (€1.76 billion) shadow banking hub – the ultra-tax efficient and unregulated world of special purpose vehicles (SPVs) used to hold assets from distressed debt to greenhouse gas credits – needn’t worry too much about a visit from the taxman.

Figures released by the Department of Finance to Labour Party TD Joan Burton this week show the Revenue Commissioners completed five audits of such vehicles, known as section 110 companies, over the past two years.

That’s a 0.12 per cent chance of an audit, based on the latest Central Bank figures showing that there are almost 2,000 such companies in existence.

The number of instances of when tax officials sought additional information from SPVs through “aspect queries” fell by 40 per cent last year to 203 – even as the Government clamped down in 2016 on so-called vulture funds’ use of tax-efficient Section 110 companies to hold Irish property loans snapped up following the crisis.

Established under 1997 tax laws designed to make Dublin’s International Financial Services Centre (IFSC) an attractive place for “tax neutral” international debt securitisation deals, an example of how pervasive Irish SPVs are in the web of international finance could be seen last month in the collapse of Australia’s largest sandalwood forest company.

Quintis, whose sandalwood oils are used in perfumes, cosmetics and medicines, called in administrators on January 19th after a Dublin-based special purpose vehicle connected to US hedge fund Davidson Kempner exercised an option requiring Quintis to buy almost 1,000 acres of plantations or Australian $37 million (€24 million).

It was the final straw for the already-struggling Quintis.

Dublin-listed financial services firm IFG, best known here for its former mortgage brokerage business, has been surrounded by perennial speculation in recent years over whether it will be split up, sold on or taken private by its main shareholder and chairman, businessman John Gallagher.

The group gave a partial answer on Friday revealing that “greater value may be created by a sale of Saunderson House” – the company’s most valuable business, an investment adviser focused on professionals in the City of London.

Meanwhile, news that IFG’s other unit James Hay, a provider of self-invested pension plans (SIPPs) faces penalties of up to £20 million – as a result of an investigation by HM Revenue and Customers a biofuel investment product previously offered to clients – sent IFG shares tumbling as much as 16.5 per cent.

A successful Saundeson House deal might prompt Gallagher, or someone else, to take over and sort out the remaining business.