What America Firsters should learn from Boeing’s Bombardier fiasco 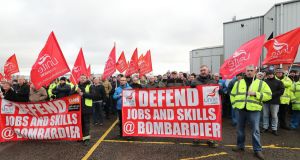 In an increasingly partisan bureaucracy, the decision of the United States International Trade Commission to throw out a complaint by Boeing, the American aerospace giant, against its Canadian rival Bombardier is refreshing for its common sense.

The independent arbiter of US trade disputes published its findings this week, three weeks after announcing it would not confirm penalties imposed by the US government. It didn’t mince its words. “Boeing lost no sales or revenues,” it said.

The US department of commerce, led by the former Bank of Ireland investor Wilbur Ross, had proposed slapping a punitive tariff of almost 300 per cent on the cost of Bombardier CSeries jets sold in the United States. It largely bought Boeing’s argument that the Canadian group was dumping its planes in the US on the back of state subsidies.

This wasn’t some arcane trade dispute. Almost 4,000 jobs at Bombardier’s Belfast plant, which makes wings for the CSeries, were under threat. Despondent Canadian executives had held out little hope for a truly independent ruling from what is, after all, a US trade forum.

But the commission said the 110-seat CSeries jets ordered by Delta, the United States’ second-largest carrier, did not compete with Boeing’s smallest 737 jet. Effectively, they are pitched to different markets.

It also said the CSeries Delta deal did not come at Boeing’s expense because the US giant did not offer Delta any new aircraft. Essentially, Boeing had never sought the contracts it was complaining about – and couldn’t have delivered on the specification agreed.

These were the two key arguments put forward by the Canadian side in defence of the Delta deal. And the definitive nature of the commission’s ruling – the vote was 4-0 – leaves one to wonder how the US department of commerce so fully bought into the case Boeing had made.

For the US administration the key lesson of the fiasco is that it needs to define more clearly for itself the line that divides its current mantra of America First from the necessary recognition of the rules of free trade.