VW Touareg may be banned over emissions manipulation 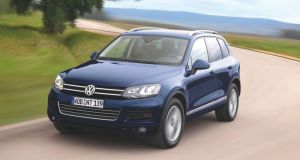 Germany has warned that the VW Touareg is likely to face a road ban because its on-board software manipulates emissions, days after a ban on the new Porsche Cayenne which shares some of the same technology.

Ahead of a crisis summit of car makers and politicians on Wednesday, Mr Dobrindt said Germany’s car makers “damn well have a responsibility” to address the growing crisis over cartel collusion and consumer and environmental fraud.

“The auto industry has manoeuvred itself into dangerous waters . . . it damn well has a responsibility to recover trust and resolve the mistakes made,” said Mr Dobrindt to Bild am Sonntag newspaper.

Mr Dobrindt has been accused by his critics of being too close to the car industry both before and since the VW scandal broke in September 2015. He dismissed critics’ claims of complicity in the scandal, attacking environmental campaigners as being “secretly pleased” by a scandal they were using to “take an axe to the roots of our economic success”.

He insisted that all emissions irregularities in diesel cars would be resolved. So far in Germany, the federal auto authority has ordered recalls of 2.5 million VW branded cars, 24,000 Audis and 7,500 Cayennes. Daimler has recalled about three million cars around Europe for software updates, which it insists is a “voluntary” measure.

Mr Dobrindt denied he was prioritising the interests of motorists and car companies over citizens’ health, saying he favoured “combining the two”.

Opposition Green Party co-leader Cem Özdemir said a shift to cleaner cars should be encouraged, but that anyone who proposes using taxpayers’ money to reward car companies who defrauded their customers “clearly has missed the point”.

A 12-page BMW memo from 2007, printed in Bild am Sonntag, describes “two modes” for diesel engines: one “highest efficacy” mode during testing and another mode with “lower efficacy”.

The latter mode would use less urea fluid to neutralise noxious nitrogen oxide from diesel fumes, part of so-called “AdBlue” technology. This is the trick VW has admitted using in its diesel cars. But proof of industry-wide fraud follows claims VW, Daimler, BMW and others agreed on “AdBlue” tanks too small to practicably meet emissions targets – without software to manipulate emissions.

While BMW insisted on Sunday its diesel engines were just as effective on the road as in a test situation, federal ministry tests showed “certain peculiarities”.

While VW has agreed a €22 billion settlement with US authorities, Bosch has already agreed to pay a €300 million fine for its role in the affair.

On Friday, Stuttgart’s administrative court opened the door to outright diesel bans in the city as the most effective way to meet air-quality regulations. With similar cases looming in other German cities, the Stuttgart judges dismissed arguments that such a ban was disproportionate, saying citizens’ health trumped the property rights of diesel drivers.

If a ban shifted the pollution problem elsewhere, they added, diesel bans could be imposed there, too.