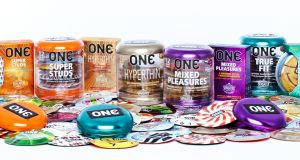 Just some of the condoms and lubes produced by Karex

There can’t be that many people whose business card is a condom wrapper, but MK Goh is no ordinary entrepreneur.

Goh, the chief executive of Karex, the world’s largest condom manufacturer, is often asked to repeat what he does for a living when introduced to strangers.

“ ‘You build condominiums?’ is what they ask, thinking they have misheard me,” he says. ‘ “No, I make condoms,’ I tell them.”

The next question he is usually asked is where they sell the “biggest condoms”, Goh adds, laughing.

Ever the diplomat, the Malaysian businessman, who was in Monaco recently to take part in the EY World Entrepreneur of the Year awards, has a stock answer to hand.

“I always say we have an extra-large segment in every market we operate in.”

Goh’s business card, which naturally has a free condom included, is there to make sure no one is left in any doubt about what he does.

Selling condoms is really about saving lives, and 1½ grams of rubber can change the world, so doing this has given me a mission

He entered the family business reluctantly after his father died unexpectedly, but he soon discovered that condoms were his passion.

“My dad’s original intention was for me not go into the business, and it was really more of an obligation that brought me into it. I couldn’t have possibly imagined then that this obligation would turn out to be something I’d end up loving doing, but it did. Selling condoms is really about saving lives, and 1½ grams of rubber can change the world, so doing this has given me a mission,” he says.

Goh first got involved in the family business at the age of 12 after his father experienced financial difficulties.

“My father went through a very difficult time, and we had to pool our money to make the company what it is today. We lost our home and went to live in the factory, so by the time I was 13 I knew every aspect of the business, from cleaning the toilets to packing and loading containers,” he says.

Goh eventually left home to study in Sydney, Australia, but the death of his father brought him back home sooner than expected. He has led Karex since 1999.

Goh says strangers are surprised to learn that Malaysia is one of the world’s biggest producers of condoms, particularly given it is a predominantly Muslim country. He says he has upset some people through his educational work in promoting sexual wellness and his support of the LGBT community.

“Malaysia is a country that does not give full rights to all communities, so people sometimes frown at what I do, but there haven’t been protests outside our factories or anything like that.”

Condoms might once have been something that were covertly bought from machines in pub toilets, but they are now more freely available than ever. Goh and his family are partly responsible for this.

Karex, which recorded revenues of $92 million (€82.2 million) in its last financial year, was responsible for nearly 17 per cent of all the condoms made globally.

Last year it produced about five billion for export to more than 120 countries. It is now looking to ramp that up to seven billion by the end of 2017. Not bad for a company that was only producing three billion a year prior to its listing on the main Malaysian stock exchange in late 2013.

Goh says that while people were once wary of discussing contraception, this has changed, partly as a result of the HIV/Aids crisis, which encouraged a lot more people to not just talk about condoms but also to use them.

“Some 50 per cent of the world’s population is below the age of 25 years so there’s a huge market out there for us,” he says.

However, while the safe sex message might have caught on in some regions, there are others where education is still required, says Goh.

“Research has shown that in Africa, for example, just 25 per cent of people use condoms in sexual intercourse. That really has to be brought up to at least 75 per cent,” he adds.

Goh says there has been plenty of innovation in condoms in recent years in terms of different shapes, sizes, textures and materials used.

“No one walks into an ice cream parlour and just wants vanilla any more. People want different variations and it is the same with condoms. In mature markets people are no longer as focused on safety, it is all about pleasure.

“In addition, women are now bigger buyers of condoms and they don’t necessarily want the same things as men. Asia, meanwhile, is a huge market for extremely thin condoms,” Goh explains.

As well as producing condoms for the likes of Durex, Karex also has its own brands. Last year, it acquired the UK’s largest condom maker, Pasante, for £6 million as its seeks to gain more market share globally.

The acquisition leaves the group in a situation where it is responsible for the production of almost 80 per cent of condoms distributed by the National Health Service, and for a significant number of value condoms produced for the likes of Tesco and Boots.

Another challenging area has been ecommerce. With easy access to condoms, there has been little demand for them from an online audience. However, Goh has spotted one key area for growth.

“Men come in all shapes and sizes, though, and so now through us online they can buy condoms in the same way that women buy bras. They can download a measuring device that lets them measure their length and girth to find the right size and then order condoms through us.”

“This works well online partly because men can be more honest about what size they are but also because you can’t usually get irregular sizes offline. We have 66 sizes of custom-fit condoms available but I can’t find a retailer that will stock them all, so online is a good place to sell them.”